VENICE, Sept 9 (Reuters) – An empty chair stood in for Iranian director Jafar Panahi at Venice on Friday as the festival hosted the world premiere of his latest movie “No Bears” while the acclaimed film-maker languishes in jail back home.

Panahi was arrested in Tehran in July and is serving a six-year prison sentence after being found guilty of promoting “propaganda against the Islamic Republic”.

He was one of three film-makers detained in Tehran in less than a week amid a renewed crackdown on dissent in Iran.

Panahi, who has made a string of award-winning movies, including “The Circle”, “The White Balloon” and “Taxi”, sent a letter from his prison cell which festival director Alberto Barbara read out this week in a panel on film-makers in peril.

“The work we create is not commissioned (so) some of our governments see us as criminals,” said the letter, which was co-signed by another jailed Iranian director, Mohamad Rasoulof.

“Some (directors) were banned from making films, others were forced into exile or reduced to isolation. And yet, the hope of creating again is a reason for existence,” they wrote.

Directors, actors and industry figures gathered on the red carpet ahead of Friday’s premiere to show their solidarity with imprisoned filmmakers around the world, holding up photos of some of those detained, including both Panahi and Rasoulof.

Who is Mohammad Rasoulof, Winner of the Berlin Film Festival’s Golden Bear Award?

Venice is showcasing four Iranian films at its festival, including two presented in the main competition – “No Bears” and “Beyond the Wall”, directed by Vahid Jalilvand.

“No Bears”, which Panahi not only directed, but also wrote, produced and starred in, follows two love stories seen through the eyes of a director and his film crew, in which the couples are thwarted by the mechanics of power and force of tradition.

Panahi made the film at a time when he was free to travel in Iran but not allowed to go abroad. As in real life, the director in the movie, played by Panahi himself, had to oversee the shooting of his movie in Turkey via a video link.

“Everyone was a little stressed and wanted to get exactly what Mr. Panahi wanted … he had such perfectionism,” Iranian-born actress Mina Kavani, who lives in exile in Paris, told reporters at a news conference.

“I made a choice and have lived in France for 12 years. But I have not been sitting here for 12 years, I am fighting,” she said, sitting next to the empty chair reserved for Panahi.

“Beyond the Wall” director Jalilvand still lives and works in Iran. He said that dialogue was needed in the country with the country’s rulers and security forces to try to overcome a deep split in society.

“There is no pure black or pure white. Everything is yin and yang. If we can create this sense of brotherhood, dialogue will become much easier, there will be less violence,” he said, speaking through an interpreter. 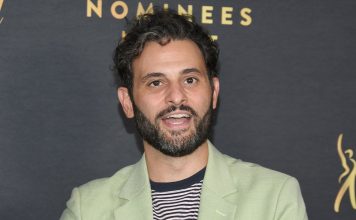 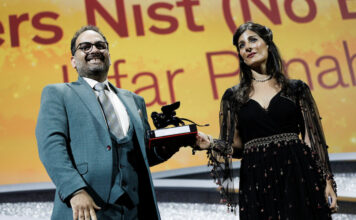