The U.S. Department of Defense has dismissed reports by Iranian state media that Michael D’Andrea, dubbed “Ayatollah Mike,” a senior officer of the Central Intelligence Agency (CIA) in charge of the Iran Desk, was among people who died after an American surveillance plane crashed in the central province of Ghazni in Afghanistan on January 27.

“A U.S. Bombardier E-11A crashed today in Ghazni province, Afghanistan,” the Spokesman for the U.S. Airforce, Colonel Sonny Leggett, tweeted on January 27. “While the cause of the crash is under investigation, there are no indications that the crash was caused by enemy fire. We will provide additional information as it becomes available.”

Despite the unequivocal denial by the U.S. government, the Iranian state media have continued to report Michael D’Andrea’s death in the crash, citing Veterans Today, pro-Kremlin conspiracy theories, and fake news websites.

“According to Russian intelligence sources, Michael D’Andrea, a key CIA player in West Asia, has been killed in the downed U.S. military plane in Ghazni,” Mehr News Agency reported on January 28. “D’Andrea is the head of U.S. intelligence operations against Iraq, Iran, and Afghanistan and is believed to have a pivotal role in many acts of terror, including the assassination of the [Islamic Revolutionary Guards Corps’ Qods Force] IRGC-QF commander Lieutenant General Ghasem Soleimani [killed on January 3].”

“Veterans Today quoted Russian intelligence sources as saying that the CIA official was on board the plane that was downed on Monday in Ghazni,” Mehr added. “Pentagon has confirmed that Air Force E-11 surveillance aircraft has crashed in Taliban-held territory in Afghanistan. They claimed that ‘there was no indication the crash was caused by enemy fire.’ This is while the Taliban has claimed responsibility for the downing.”

“The plane was on an intelligence mission, and was brought down in Sado Khel area of Deh Yak district of Ghazni province,” Zabihullah Mujahid, a spokesman for the Taliban tweeted on January 27. “The crew onboard included high ranking U.S. officers.”

“American officials have finally broken their silence about the crash of an aircraft in Afghanistan,” footage of a news broadcast published by the Iranian Judiciary’s Mizan Online News Agency on January 27, said. “Several media outlets have reported that among those killed in the crash was Michael D’Andrea, dubbed Ayatollah Mike, a senior officer of the CIA. He became the head of CIA’s Iran operation two years ago. He played a crucial role in the U.S. targeted drone killings. He directed the assassination of Imad Fayez Mughniyeh [the founding member of Lebanon’s Islamic Jihad Organization, killed on February 12, 2008] and General Soleimani.”

Some supporters of the Islamic Republic regime posted messages on social media hailing the alleged killing of “Ayatollah Mike.”

@Haj_Heydar tweeted: “The death of Ayatollah Mike, the head of Iran desk at CIA, in the crash of the U.S. plane has not been confirmed yet. He should be on the list of ‘Hard Revenge.’ He had a hand in the recent protests. He also played a crucial role in the assassination of Haj Imad Fayez Mughniyeh and Haj Ghasem Soleimani.”

“Those who have threatened to kill our commanders will regret to have ever issued those threats. We warn Americans, Zionists, and others that their senior military officers will not be safe if they continue to threaten our commanders,” the commander of the IRGC Major General Hossein Salami said in an interview with the IRIB-TV on January 25. “None of their military officers will be safe if they act on their threats. We will respond differently should they insist on continuing with this game. They will face an entirely new situation that they cannot control. We urge them to stop these actions.”

“The missile attacks [on Al Asad Air Base in Iraq] was a slap in the American face which marked the start of the Iranian response to the killing of the martyr Soleimani. Iran will eventually kick the U.S. out of the region,” the commander of the Basij (volunteer) Forces Brigadier General Gholamreza Soleimani said in an interview with the Beirut-based Yemeni Al Masirah TV on January 25. “The U.S. forces will not be safe in the Middle East and the Islamic world. They will eventually be pushed out of the region.”

“The United States on Tuesday recovered the remains of two personnel from a U.S. military aircraft that crashed in Afghanistan,” Reuters news agency said on January 27, “The U.S. military said an E-11A aircraft had crashed in the province of Ghazni, but disputed claims by the Taliban militant group that they had brought it down.”

“A United States military spokesman confirmed the loss of the E-11A communications plane in Ghazni province and said there was no indication the jet had been shot down,” The Telegraph reported on January 27. “Pictures shared by Taliban-linked social media accounts instead showed wreckage from a Bombardier E11 BACN emblazoned with U.S. Air Force insignia. The aircraft is known to operate from nearby Kandahar airfield in southern Afghanistan and helps boost communications among troops on the ground.”

“The Defense Department said there is no evidence that the Bombardier11A, an Air Force surveillance plane, was brought down by enemy fire over the Ghazni province. However, the Taliban controls much of the area, fueling suspicions that Taliban fighters may have targeted the aircraft,” The Washington Post reported, “Following the crash, Taliban militants reportedly were searching nearby villages for two Americans believed to have survived the crash.”

“A defense official, speaking to VOA [Voice of America], now explicitly dismisses the Russian/Iranians story. Good. The likelihood that the Russians & Iranians made up the story about Mike D’Andrea is now 99 percent,” Michael Doran, a senior fellow at the U.S.-based Hudson Institute Political Studies tweeted on January 29. “I remain fascinated by this episode. While the U.S. is focused on recovering bodies in hostile territory, informing family members of victims, figuring out what went wrong, and saving and destroying equipment, the Russian-Iranian political warfare machine is busy telling tales.” 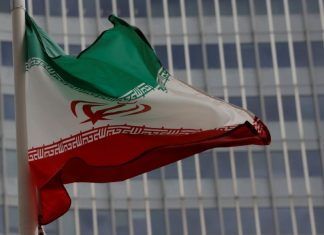