“Russian-Turkish Rapprochement: Implications for the West”

Oksana Antonenko, a former IISS Senior Fellow for Russia and Eurasia, a Visiting Senior Fellow at the Institute for Global Affairs at LSE, gave a comprehensive presentation that covered the domestic, economic and strategic drivers of Russian-Turkish rapprochement.

She underlined the historic, interest-based and geopolitical limitations on the partnership, and the implications of these considerations for Western states, especially regarding NATO, European energy security and Western options in Syria.

Relations between Russia and Turkey could be compared to a winding path in recent years. They reached a flash point at the end of 2015, when Moscow imposed sanctions on Ankara in the aftermath of Turkey shooting down a Su-24 jet near the Syrian-Turkish border. However, less than two years later, the sanctions were lifted. The relationship blossomed to what is now seen by some as a ‘strategic partnership’ covering not only economic and energy ties, but also military and security cooperation – including Turkey’s purchase of the Russian S-400 air-defense systems.

Oksana Antonenko began by saying that the recent rapprochement between Turkey and Russia resulting in significant economic and military cooperation between the two countries had seriously alarmed many quarters in the West. She noted that these concerns covered the following four areas: 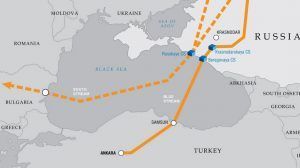 Oksana Antonenko then shared her personal opinions regarding these concerns, before dealing with each of them separately. In her view, these concerns were highly exaggerated and unlikely to cause the kind of distress that some quarters feared they might. She said that in essence there was a great deal of mutual suspicion between Turkey and Russia, though undoubtedly recent interactions had led to what she described as a “new quality of relations between them”. She said that this new relationship was useful at this stage for both states in terms of dealing with their domestic problems, following their estrangement [from] the West.

Geography, in her view, was an additional factor, given that Turkey and Russia were finding themselves in a much more vulnerable situation in their respective neighbourhoods (e.g. Syria and Central Asia), where they both shared common interests.

Oksana Antonenko underlined the fact that domestic policy in the face of increasing outside pressure had been a matter of huge concern for both states, which she described as “strongman regimes,” as they struggled to seek legitimacy while harboring Trump-like ambitions of  “making Turkey and Russia great again.”

It was her view that this process in Turkey started before the 2016 military coup, Erdogan’s struggle to shirk corruption charges, and dealing with threats from the ‘Gullan Movement’ prior to the previous general election, when he was still Prime Minister. The failed coup had, in her view, galvanized things, and displayed the institutional weaknesses of a system that had been built around one man. These developments had also led to a situation whereby Turkey had been placed more and more on the path of divergence with EU values. Further pressures had followed as a result of the EU’s refusal to grant the Turks visa-free access to Europe as part of the proposed migration agreement negotiated with the EU to contain the flow of refugees from Syria (and other places, notably Iraq and Afghanistan) to Europe, via Greece. Matters were further exacerbated by the Reza Zarrab Trial in America, the increasing tensions in Turkish-US relations, and the general feeling on the part of Turkey that it was not receiving the kind of support it was entitled to by the West (including the US’s refusal to extradite Gullan back to Turkey).

According to Oksana Antonenko, this estrangement from the West was a key catalyst in pushing Erdogan towards some kind of a convenient arrangement with Russia – especially since they had a similar system and were confronted with similar problems, irrespective of the fact that sanctions had to a large extent succeeded in curtailing Russia’s economic potential (for example,  Russian tourism to Turkey fell from 4 million in 2015-2016 to 600,000 in 2017). Sanctions imposed on Russia had hit Turkey in other areas as well, such as the construction sector, which led to Turkish companies with contracts in Russia having to end their operations. She therefore concluded that a combination of all of these factors persuaded Erdogan to seek both solidarity and an economic boost by moving closer to Russia.

Oksana Antonenko said that very similar motivating factors, such as domestic reasons, were also behind Russia’s recent moves in wishing for closer ties with Turkey. The fact that a full NATO member was formally opposing sanctions and supporting Russian action in Syria was a major feather in the cap of President Putin. These factors were bolstered by fairly serious economic considerations, such as Turkey’s role in providing construction services in Russia and, more importantly, in the export of its gas to Europe, through other channels that bypassed Ukraine.

Oksana Antonenko was nonetheless of the view that this new partnership was much less strategic and provided very few characteristics of an ‘alliance.’ In her view:

Oksana Antonenko was of the view that on the basis of existing facts, a case could be made for Turkey moving away from the West, but not necessarily becoming seriously involved with Russia.

Turning to the subject of energy, Oksana Antonenko said that even on this issue, there were more negative factors than positive ones. She said that at present there were plans for two branches of a pipeline via the Black Sea.

The first branch – for which construction had started and was proceeding despite sanctions on Russia – was a pipeline under the Black Sea for the export of some 15.75 bcm of gas/year to Istanbul for Turkish domestic use. Turkey’s other gas imports from ‘Blue Stream’ (a major trans-Black Sea gas pipeline that carries natural gas from Russia into Turkey) serviced eastern Turkey, and as such did not meet energy needs in and around the Istanbul area. She said that some 300 kilometers of the pipeline had been completed, and the project was advancing at a rate of four kilometers of pipeline per day. This project was expected to be completed by December 2019.

The second branch, which would supply another 15.7 bcm/year from Gazprom by transit for export to Europe via Turkey and Bulgaria (bypassing Ukraine), has yet to be cleared, given that Russia will not budge until a 100% guarantee is provided by the EU that it will not obstruct shipments through sanctions and other measures.

Another problem with the second branch is the fact that neither Turkey nor Bulgaria wish to simply be an intermediary for the export of Russian Gas to Europe. Instead, they wish to be partners, and Turkey sees this as a crucial part of fulfilling its strategic ambition of becoming a major energy hub (something the Europeans are not very happy with). However, making Turkey and Bulgaria partners in this endeavor would result in higher prices at a time when gas prices are falling due to a number of factors, including greater production and export of Liquified  Natural Gas (LNG), from the US.

At the same time, Russia is building a 2,500-megawatt nuclear reactor for Turkey, which is entirely financed by Russia. Turkey is not expected to make any payments to Russia until electricity starts being produced by the reactor.

The sale of two ‘S-400’ missile defense systems to Turkey by Russia costing some US$2 billion, despite all of the associated hype that went with it, was not a smooth process. Turkey had wanted greater localization, or transfer of technology as an integral part of this purchase, which the Russians had simply refused. In the final analysis, it was agreed that a plant on Russian soil could be built to assemble the missiles. This sale was a boost for Russia, in that it has proved its success at wooing a NATO member on such issues.

Nevertheless, Oksana Antonenko was adamant that this transaction could not be construed as the start of something bigger. She felt it was important to note that other NATO members, such as Cyprus, had made military purchases from Russia in the past. Moreover, it was her view that this new relationship between Russia and Turkey was not a substitute for NATO. and so far Erdogan had done nothing to seriously damage his country’s ties with NATO.

On  Syria, Oksana Antonenko  said she believed that both Russia and Turkey – in conjunction with Iran – were pursuing policies that were essentially convenient for them. She said they were “constraining their activities rather than coordinating them.” She also noted that the ”Astana Peace talks had had some success prior to the current troubles in Idlib. She said that apart from Turkish concerns about the support that the US had given to the Kurds and the implications of that on PKK activities in Turkey, the war against ISIS had driven attention away from the causes of the Syrian civil war. What was unclear, now that ISIS was no longer the issue, was whether the civil war was going to be resumed or whether things would go back to the way they were beforehand.

Oksana Antonenko said that Putin wanted some kind of resolution to the Syrian crisis before the March Russian elections –which was unlikely. The recently held Peace Conference in Sutchi had been orchestrated to serve such a purpose. She felt that this had now become an albatross around Putin’s neck, because they could not get all the parties (especially the Kurds with whom, unlike Erdogan, Putin has no special problems) to attend.

She ended her comments by saying that Putin’s vision, of ending Russian military operations and drawing a new constitution and a new political system for Syria, as originally anticipated prior to the Russian elections of March 2018, would now no longer materialize.