Social media were recently flooded with the picture of an infant whose head had been severed during birth at a hospital in Iranshahr, in the southeastern province of Sistan and Baluchestan. In November 2015, a 23-year-old Baluchi woman had a similar experience at Imam Ali Hospital.

The number of women and infants who die during childbirth in Sistan and Baluchestan province is three times the national average, according to Mehdi Tabatabaei, a faculty member at Zahedan University of Medical Sciences’ Infectious Diseases and Tropical Medicine Research Center. 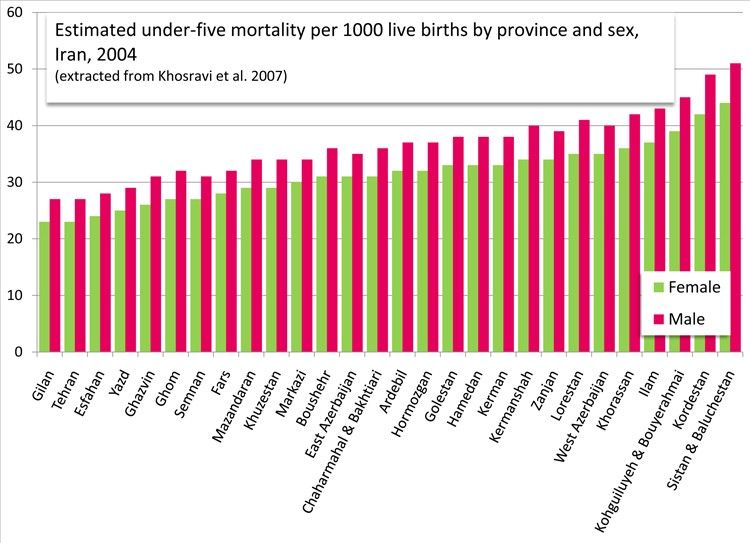 Despite efforts by health authorities to provide better medical care to economically disadvantaged segments of Iranian society, the death rate among women and their newborn babies remains high in poor provinces such as Sistan and Baluchestan.

Habibollah Sarbazi, an advocate of Sunni rights and the director of Baluchi Rights Campaign, recently told Kayhan London: “Hospitals in Sistan and Baluchestan have the lowest standards of hygiene, health care and medical treatment in the country. Some hospitals don’t have enough beds. There are no hospitals in many of the cities and towns in the province. There is also a shortage of doctors and nurses. Some doctors work for a couple of days a week, and only for a few hours at local health clinics.”

Sarbazi quoted Mr. Miri, the president of the Zahedan University of Medical Sciences, as saying last year that a new hospital in the city of Saravan had only 25 beds to accommodate 136 patients. Wards were blocked up so that staff could not move new patients into hospital beds. According to Dr. Iraj Zareban, the president of the Iranshahr University of Medical Sciences, a newly built hospital in Chabahar had only 48 beds to accommodate 158 patients it had to care for on average every day.

Sarbazi said: “It is clear that these hospitals are ill equipped to provide proper medical care to local residents. Many pregnant women have to travel a few hundred kilometers to find a hospital with a fully equipped maternity ward.  There were 18 recorded cases of women giving birth in ambulances en route to hospitals in the province last year. Pregnant women in rural areas don’t even have access to an ambulance. In many instances, they give birth at home. There is no data available on the number of women who die during childbirth in these remote villages.”

“Close to 2.7 million people live in Sistan and Baluchestan, making it one of the least populated provinces in Iran,” Sarbazi added. “But 10 percent of all of the women and babies who die during childbirth in the country are from this province. Sistan and Baluchestan is one of the poorest and least populated provinces in Iran, but it has the highest rate of infant mortality. Many pregnant women lose their lives en route to the hospital.”

“I think the actual number of women and children who die prior to or during childbirth is three times the official figure,” he said. “It is true that the death rate among this group has decreased in recent years due to better medical care, but the number is still very high. Why should Sistan and Baluchestan and other provinces be deprived of basic health care? Every day we read about new hospitals or schools being built [by the government of Iran] in Iraq and Lebanon. Why not build hospitals with 300 beds in Sistan and Baluchestan? It would appear that the Sunni-populated regions of the country are neglected.”

“The shortage of doctors and specialists forces many Baluchi residents of the province to seek medical help in other regions, including Zahedan, which has better health care facilities,” Sarbazi said. He added: “There are no specialists in Iranshahr, Saravan or Chabahar. Zahedan City Council converted a guesthouse into a clinic in the city of Yazd last year in order to accommodate the overflow of patients that local hospitals couldn’t cope with. Why should the residents of Sistan and Baluchestan have to travel long distances to seek medical treatment?”

Highlighting the hospital staff’s poor treatment of patients who are unable to shoulder the cost of their medical bills, Sarbazi said: “A video was recently released showing how badly patients were treated by staff at a number of hospitals in the province. We see instances of patients with serious illnesses being refused a hospital bed and placed on tables instead, simply because they couldn’t afford the medical cost.” He added: “One patient was reportedly detained for 40 days because he couldn’t pay his hospital bill.”

Sarbazi also noted that there were “many reports about patients who are given medicines that have reached or past their expiration date.”

“A large segment of the population of Sistan and Baluchestan lead hard and painful lives,” he concluded. “Despite the province’s vast resources, it has been neglected by the government. As a result, the people are suffering.”