31 Jan – There are reports of toddlers being used inside Iran’s prisons to sell drugs, President of Children of Imprisoned Parents International (COIPI), Hamed Farmand said in an exclusive interview with Kayhan Life.

Speaking to Kayhan Life, the head of the international organization which works with children of prisoners said drug dealers serving out sentences in Iran’s prisons were targeting small children to pressure their mothers into buying and using narcotics. Farmand said that in some instances toddlers were being tortured by inmates to force mothers into buying drugs.

COIPI’s President Hamed Farmand is a leading expert on children’s and women’s rights in prison and says that the violations are endangering mothers’ and children’s lives.

“Reports coming from inside Iran’s prisons tell us that children and mothers’ rights are being violated in several ways,” Farmand told Kayhan Life. “Inmates are using children to pressure their mothers into taking drugs. These mothers are often recovering addicts, so they are already vulnerable. We’ve also received reports of inmates torturing children, as the distressing sounds that follow force mothers to succumb to buying and taking drugs.”

Further research carried out by COIPI indicates that there is limited information on how many kindergartens have opened and whether or not they have obtained licenses to operate. The organization believes that nurseries could be exploited and used for activities unrelated to childcare. The lack of government information and media coverage on the issue means that the condition and number of functioning kindergartens are unknown.

The reports come as Iran’s Director General for Children and Youth Affairs, Mohammad Nefriyeh, told Iranian media outlets that he had urged members of the judiciary to set up kindergartens in and around Iran’s prisons for children of female prisoners. Nefriyeh asked the judiciary to protect the mother-child relationship and place the welfare of the child at the center of its criminal justice policies. He also told the government that his department would be willing to remove children from prisons nationwide if officials did not want to put a formal policy in place establishing prison daycare centers. The policy has been on the government’s table for over a decade. Nefriyeh confirmed in 2016 that no permits had been issued that year.

According to Farmand, COIPI is aware of only six operational nurseries, despite there being at least 19 prisons which currently house children and their mothers. Reports that functioning nurseries are only open for short periods of time are also a concern. “Most of these nurseries close early in the afternoon and are closed on weekends,” says Farmand. “There is also a limited budget for hiring professional social workers which affects how these nurseries are run.”

The latest figures reveal that at least 1,800 children have been removed from their mothers in prison by the government’s welfare department, which Nefriyeh manages. According to a member of parliament, over 2,300 children live in Iran’s prisons with their mothers. Exact figures are unavailable. Nefriyeh also told Iranian media outlets in June that his department did not hold statistics on the number of children in prisons. Other figures indicate that the total number of prisoners in the country is about 230,000, of which 5 percent are thought to be women. Most of these women were arrested for drug-related offenses, and make up 54 percent of drug addicted prisoners with the remaining 46 percent being men.

Cases in which mothers avoided immediate execution as a result of having babies have also been documented. Although not all new mothers are spared execution — not even pregnant women — some executions have been stalled to allow mothers to finish breastfeeding their children. Occasionally the delay leads to the death penalty being lifted. As Islamic law prohibits the killing of a woman who is breastfeeding (until her child reaches the age of two), some mothers have used this legislation as a loophole to try to avoid being executed, claiming that they were breastfeeding even after their milk had dried out.

Concerns over children living with their mothers in prison were raised by Mohammad Javad Fathi, a member of Parliament’s judicial committee, in July 2017. Fathi called the situation “strange” and said it needed to be examined further. He urged the central prisons organization in Iran to provide accurate data on the number of mothers in prison, warning that concealing the extent of the problem would not help to resolve the underlying issues around offending. The majority of toddlers inside Iran’s prisons were born in prison. 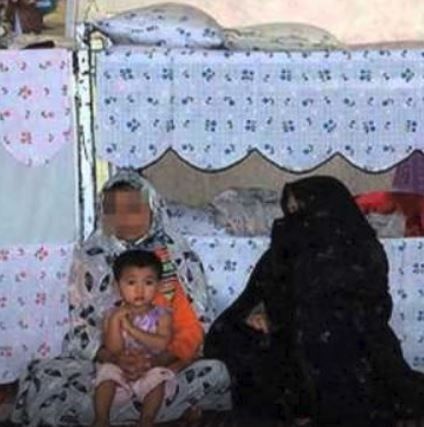 A report produced by Children of Imprisoned Parents International (COIPI) in November last year said the conditions which women and children endure inside Iran’s prisons amounted to violations of their human rights.

A UK Home Office report published in 2016 highlighted the lack of hygiene and proper nutrition for inmates inside Iran’s prisons. One example outlined in the report featured details of living conditions inside Qerchak Prison, which is often referred to as “the end of the world” by its female prisoners. Qerchak was once a poultry farm before it was turned into a prison for women in 2011.  The report said, “The deplorable hygienic and nourishment conditions and lack of medical care has turned this prison into a concentration camp. This prison holds around 40 women whose children are also held with them in this unbearable condition.”

Director General Mohammad Nefriyeh explained last week that a memorandum between the welfare department and prison organizations in Iran outlined the mother and child policy, which requires that all children above the age of two living with their mothers in prison must be removed and placed in state care. He said that the removal of children from their mothers inside the prison system was necessary to prevent children from being exposed to bad influences inside the prison system.

The Director General also appeared to confirm that the government had sanctioned a nation-wide sweep of Iran’s prisons to remove all children above the age of two from their mothers and that his welfare department was ready to implement the move. On managing nurseries and day care centers for children within the prison system, Nefriyeh said, “Prisons present special security conditions and this causes a problem when traveling with a child to kindergarten, so it’s not possible to establish kindergartens in all prisons. However, some prisons have set up kindergartens in nearby locations. As some prisons have not managed to set up kindergartens, we have also suggested that if possible, children should be able to visit the nearest kindergarten and nursery so that they can be close to their mothers.”

The policy would enable mothers to have a visual relationship with their children which would continue until mothers are released from prison. Once released, officials would return the child to their mother’s care.

Prisons which decide to set up nurseries are issued permits under the proposed scheme with the Director General explaining that the decision to do so is left to each individual prison: “It is not our responsibility to establish a kindergarten in prisons, but if a nursery is established we will issue a kindergarten permission.”

Child rights activists in Iran believe that kindergartens inside prisons are not a solution for incarcerated mothers and their children and have suggested the creation of more informal prisons for housing mothers and their children instead, while others would like to see children removed from conventional prison cells completely. Farmand believes that traditional prison cells make inappropriate homes for babies and he would like Iran to follow Europe and the United States in creating Mother and Baby Units (MBUs) instead.

Farmand says these units uphold children’s and mothers’ rights by providing clean living conditions, appropriate nutrition for mothers and their babies and educational facilities: “The current situation, besides the humans rights violations we’re seeing, affects childhood development in a negative way, particularly their brain development. It means most of those children can’t attend school or can’t finish their schooling later, because their brains do not get the chance to develop fully. Our research also shows that keeping children inside Iran’s prisons prevents children and their incarcerated mothers from making safe and strong bonds. I disagree that keeping children inside female prisons in Iran is based on children’s best interests, despite what Iran’s law makers claim.”