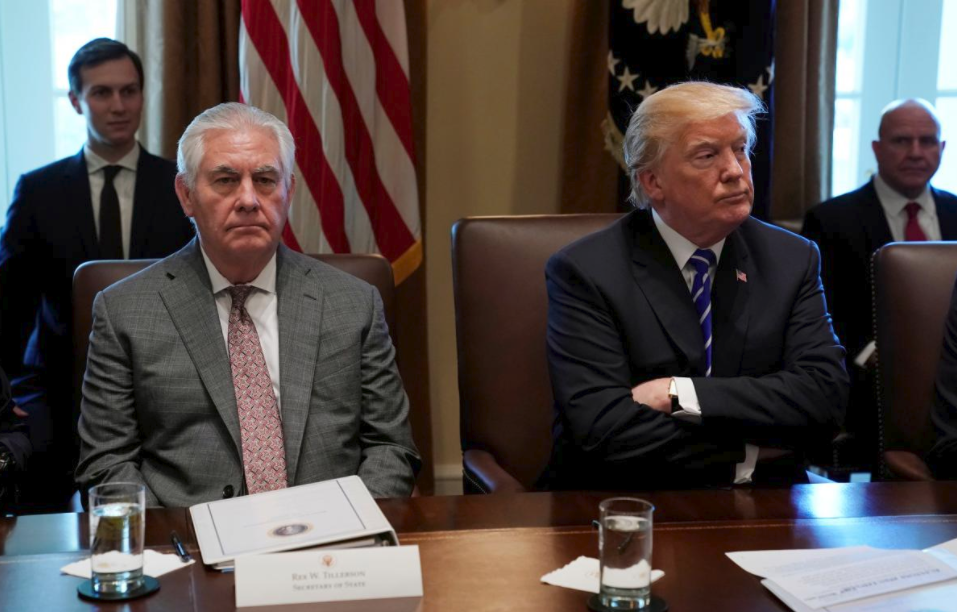 Thomas M. Countryman is a career diplomat who served as United States Assistant Secretary of State for International Security and Nonproliferation, from 27 September 2011 to 27 January 2017.

He joined the US State Department in 1982, and worked in The Office of Counterterrorism from 1993-1994.Countryman was the special advisor to Madeleine Albright on Middle Eastern Affairs, whilst she was serving as US Ambassador to the United Nations.

He currently chairs the non partisan Arms Control Association, which is based in Washington.

Q: What does the departure of Tillerson mean for the Iranian nuclear deal, if anything?

A: I think it will have an effect, and the effect is to make it more likely that President Trump will abrogate the deal. Mr. Tillerson, we know, had argued previously to the president that he should continue to waive sanctions under the deal. And according to reports, the president did not like being told that he should continue giving the waiver, and it could be one of the reasons that the president let Tillerson go, that he did not like the advice he was getting.

With Mr. Pompeo, we know that he has said some of the same things as President Trump about Iran, that he has said some hostile words about the Iranian behavior, in stronger terms than Tillerson. But I think the main difference is that it seems what the president wants is a yes man, someone who will agree with whatever he says and my concern is that with Pompeo, he will be getting a secretary of state who is not just a yes man, but a hell, yes, man.

How much of the advice Tillerson was giving the president was his own conviction, and how much of it was influenced by what he was hearing from Senior Foreign Service officers?

A:There is certainly an influence and I have been critical of Mr. Tillerson for some of his management practices at the state department, but the fact is that he turned out to have some good diplomatic instincts. So I think Foreign Service officers but also responsible officials in intelligence agencies and in the Defense Department [were giving], all agreed that it would be a mistake for the US to be the one to violate the JCPOA. I don’t think you can separate Mr. Tillerson’s views from the advice and analysis he was getting from State Department officials.

Q:Do you have any information on what the relations might be between Mr. Pompeo and senior staff at the State Department?

A:I think it is too early to say. He is just beginning to start the process of transitioning to the State Department and he needs to meet senior officials before having a confirmation hearing in the Senate. Mr. Pompeo had a good reputation at the CIA [Central Intelligence Agency] as someone who built up the morale of the agency and who was respected by his people. He had a better reputation than Mr. Tillerson did at the State Department. Part of that was because the White House was very aggressively attacking the State Department and its budget and was not doing the same at the CIA, so it was an easier job in that sense.

It is too early to say whether Mr. Pompeo will be influenced, will change some of his positions as a result of listening to advisers at the State Department. I hope he does listen. I think he has a chance to be a better Secretary of State because he has a better relationship with the president than Tillerson did and that’s crucial, but will he do the right thing with his effectiveness as secretary of state, will he make smart decisions, will he listen to people who will explain the consequences of those decisions?

Q:Whether it is because of Trump or South Koreans’ efforts, the North Korea situation seems to be signaling possible improvements. Will that have any impact on the Iran deal or on the president’s thinking about the Iran deal?

A:I hope it will have an impact. The direction is actually the other way – that Trump’s decision on the JCPOA will have a very significant impact upon the possibility of making a deal with North Korea. If the president continues to say that North Korea cheats on every deal and violates every time, and then goes and does the same thing with a multilateral agreement that the United States has signed, it will be very hard to tell the difference between the United States’ credibility and the North Koreans’ credibility.

And it raises the question why the leader of North Korea or any other leader would make any deal with this president who is so ready to walk away from an effective deal. So I hope the president is able to grasp that connection because I do want him to succeed in the talks with North Korea, but I think the chances of success are diminished if he goes ahead and tears up the JCPOA.

Q:The Iranians so far have said they are not going to take the bait and unilaterally pull out. What should the Iranians do if Trump pulls out unilaterally?

A:I hope that the Iranians do no respond in the same kind of irrational way. If Tehran takes the “high road” and says we signed this agreement and we are committed to it, they will gain credibility with the European Union, as well as with Russia and China and I think that will help them politically, maybe not in the short term, but in the long term. Of course if Trump re-imposes the sanctions, then Iran is going to suffer economically. I hope the leadership in Tehran recognizes that they would have even more suffering if they respond by violating their commitment under the JCPOA.

The Saudi Crown Prince is now saying the Saudis want to enrich uranium. What impact would that have either on Trump’s thinking or on the Iranian government’s thinking?

A:I think for Saudi Arabia to pursue enrichment of uranium is just as economically stupid as when the Iranians did it. There is no economic justification whatsoever for spending tens of billions of dollars to create an industry for which there is already a surplus in the world. So economically it makes no sense. It is a battle of prestige between Iran and Saudi Arabia. I think that is a battle that Iran lost at the cost of tens of billions of dollars and I think it would be foolish for Saudi Arabia to do what the Iranians did. But I recognize that when you are rich you can afford to be foolish.

Q:Could this move signal to the Iranians that if the Saudis are going into the nuclear arms business, perhaps they should keep their options open?

A:Iran has options open under the JCPOA. It is permitted a limited enrichment program for the next 20 years. It will take Saudis at least 20 years to get anywhere in the enrichment program. So the statements by the Crown Prince should have no effect on the decisions that either the United States or Iran are making today.