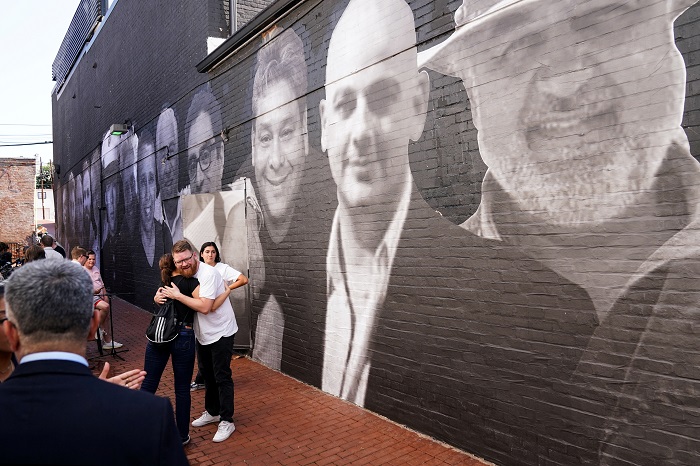 By Humeyra Pamuk and Simon Lewis

WASHINGTON, July 28 (Reuters) – The plight of Americans detained by foreign governments has moved into the spotlight with the case of U.S. basketball star Brittney Griner, who is on trial in Moscow on drug charges.

Since she was arrested in February, U.S. President Joe Biden has faced increasing pressure to bring home detained Americans. Although the U.S. government does not provide figures, there are more than 60 such detainees, according to the James Foley Foundation, named after an American journalist abducted and killed in Syria.

The foundation says U.S. citizens are wrongfully detained in about 18 countries. Most are held by U.S. adversaries such as Iran, Russia and Venezuela, which seek either cash or major changes in U.S. foreign policy for their release.

These are some of the U.S. citizens and residents whose detentions are designated as “wrongful” by Washington, and the countries holding them.

Siamak Namazi, a businessman in his late 40s with U.S.-Iranian citizenship, was detained in 2015 by Revolutionary Guards while visiting his family in Tehran. Months later his ailing father, Baquer, was detained after returning to Iran to visit his jailed son.

Father and son were sentenced in 2016 to 10 years in prison for spying and cooperating with the U.S. government. In 2018, authorities released Baquer on medical grounds, but he has remained under house arrest.

Iranian-American businessman Emad Sharghi, who moved to Iran from the United States in 2017, was arrested in 2018. He was released on bail after eight months. A Revolutionary Court cleared him of spying and other charges but kept a travel ban.

In November 2020 another Revolutionary Court sentenced him to 10 years in jail for espionage, and he has been detained since January 2021.

Morad Tahbaz, an Iranian-American environmentalist who also holds British citizenship, was arrested in 2018. In 2019, he was sentenced to 10 years in prison on charges of colluding against national security and spying for the U.S. government.

Tahbaz, who denies the charges, has been released on bail but must wear an electronic tracking bracelet, Iranian state media said on Wednesday.

The State Department has so far publicly designated two of several detainees in Russia as “wrongfully detained” — a term that transfers the case to the Special Envoy for Hostage Affairs and raises the detainee’s profile.

Griner, the 31-year-old Women’s National Basketball Association (WNBA) star who played in Russia during the league’s off-season, was detained at Moscow’s Sheremetyevo airport on Feb. 17 with vape cartridges containing cannabis oil in her luggage.

The two-time Olympic gold medalist has pleaded guilty to charges against her but denies she intended to break Russian law. If found guilty, she could face up to 10 years in prison.

Former U.S. Marine Paul Whelan, who holds U.S., British, Canadian and Irish passports, was sentenced in 2020 to 16 years in jail for spying.

Russia said Whelan was caught with classified information in a Moscow hotel room where agents from the Federal Security Service detained him on Dec. 28, 2018. He denied spying and said he was set up in a sting operation.

At least eight Americans are held in Venezuela including five executives of Citgo Petroleum, a U.S. unit of Venezuela’s state oil company PDVSA, whom the United States says were wrongfully detained in 2017.

Washington says Venezuela is wrongfully holding Matthew Heath, a Marine veteran arrested in 2020 on charges of terrorism and arms trafficking. Heath, who has denied the charges, was hospitalized in June after what his lawyer said was an attempted suicide. U.S. officials said Heath was not sent by Washington and have accused Venezuela of holding him illegally.

Rwanda is holding Paul Rusesabagina, a political dissident charged with terrorism and other offenses last month after his arrest nearly a year ago.

The case of Rusesabagina, a Belgian citizen and permanent resident of the United States, has attracted international attention partly because his story of protecting Tutsi guests during the genocide was made into the movie “Hotel Rwanda.”

The identity of his captors is not known, and there has been no claim of responsibility. His family believes he is alive.

Syria has not publicly acknowledged Tice is detained there. But in 2020, U.S. officials under the Trump administration visited Damascus for secret meetings with the Syrian government seeking Tice’s release.

(Reporting by Humeyra Pamuk and Simon Lewis;Editing by Mary Milliken and Cynthia Osterman)