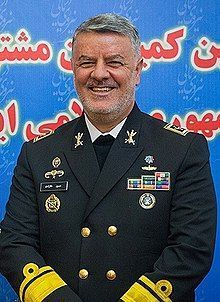 LONDON, June 24 (Reuters) – Iran on Monday described its shooting down of a U.S. drone in the Gulf last week as a “firm response” to the United States and warned it could be repeated.

“Everyone saw the downing of the unmanned drone,” navy commander Rear Admiral Hossein Khanzadi was quoted as saying by the Tasnim news agency. “I can assure you that this firm response can be repeated, and the enemy knows it.”