Two studies just published offer differing outlooks on Iranians’ attitudes towards the nuclear deal, towards their government and towards issues in the country’s regions.

The first report, a public opinion study published in July by The Center for International and Security Studies at the University of Maryland in America, includes a poll which took place from 16th – 24th January. The second piece of research was published in August, and conducted by GAMAAN, an independent research group that says it uses innovative approaches to extract authentic opinions from Iranians across a range of subjects. The study was produced by Ammar Maleki, Assistant Professor of Comparative Politics at Tilburg University, in The Netherlands.

At the time the surveys were taken, U.S. President Trump had expressed his intention not to certify the nuclear deal, though he had not yet reimposed nuclear sanctions and secondary sanctions on trade. Protests inside Iran were also ongoing.

Despite strong objections to the government’s handling of the economy, most Iranians who were asked about the possibility of overhauling Iran’s political system believed that implementing an entirely new system was unnecessary. Furthermore, 67 percent did not agree with the view that the government interfered too much in people’s personal lives, and 59 percent disagreed with the idea that “the government should not be strict in enforcing Islamic laws.”  The survey also found that a desire for the government to be less strict in enforcing Islamic laws was the protest complaint which received significantly more support from Iranians under 30, with 42 percent agreeing and 27 percent agreeing strongly with this sentiment. 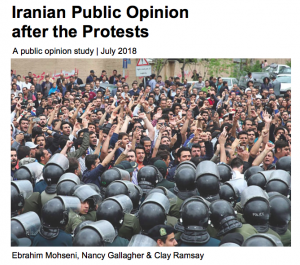 The data in the new University of Maryland study was gathered by IranPoll, an independent Toronto-based polling firm which says that its surveys have a +/- 3.1 percent margin of error. IranPoll used statistics from its own  databank of polls and surveys, which it calls VoxIran. The poll surveyed 1,002 Iranians who were contacted by telephone and were from all 31 provinces in Iran.

The results differed from the findings in GAMAAN’s survey, which based its findings on a poll it took between April 24th to April 30th 2018, using the questionnaire site Survey Monkey, to gather opinions about Iranians’ political attitudes. The questionnaire, which could be filled out anonymously, received  19,386 responses, and included individuals from every province in Iran. Of those that answered the questionnaire, GAMAAN estimates that 6 percent were Iranians residing outside of Iran, and came from 69 different countries in total. 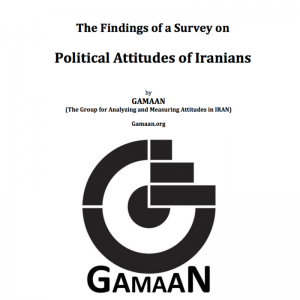 GAMAAN’s survey chose to focus on issues centering on political orientation, governmental structure and popular ideologies amongst Iranians both inside and outside of Iran. Participants were randomly selected through Telegram, Instagram, Twitter, and Facebook. Unlike the University of Maryland’s study, GAMAAN chose to interview only Iranians who had voted for Rouhani, representing a data gap made up of about one third of the population, in relative terms.

The GAMAAN survey suggests that 70 percent of those who answered their questions would vote “No” to an Islamic Republic, if a free referendum was held today. When questioned about what kind of political system the respondents might like to see in place, the most popular choice was a secular presidential republic. The GAMAAN survey also looked at individuals’ political orientations and offered respondents three choices: overthrower (those seeking regime change in the form of a secular democracy), transformist (those wanting radical change combined with a referendum) and reformist (those preferring gradual changes, developed within an Islamic Republic). The majority (37.8 percent) were in favor of a secular democracy, with transformists coming in second (30.6 percent), followed by an unknown quantity made up of Ebrahim Raisi voters who were excluded from the survey, and a small minority (3.6 perent) who elected a reformist approach.

The University of Maryland report was prepared by researchers Ebrahim Mohseni, Nancy Gallagher and Clay Ramsay. Mohseni is an Assistant Professor of Iranian Studies on the Faculty of World Studies at the University of Tehran, and a Senior Analyst at the University of Tehran Center for Public Opinion Research. The study is divided into fourteen key areas which cover the nuclear deal, missile development inside Iran, government policies, ministerial corruption, the ongoing protests, media consumption and regional issues.The report also includes data from additionalpolls carried out in April.

Maryland University’s report also included insights on the JCPOA. When asked whether or not the JCPOA had worked out, only 22 percent thought it was beneficial for Iran to make concessions in order to develop mutually beneficial agreements with world powers. A small group (11 percent) chose not to answer, leading the researchers to believe that this suggested those declining to comment were unwilling to make a judgement while the fate of the JCPOA was unclear.]

Strong support for Iran’s nuclear program was highlighted in the report, with 86 percent of those polled viewing the program as important. Reasons for this position varied. However, the most popular answer chosen by 17percent of interviewees was “‘to be able to advance in scientific areas,”, followed by 13 percent who saw it as a way to increase Iran’s power. Only 2 percent wanted the program to increase the country’s military strength. When asked about Iran’s missile development, an overwhelming majority (95 percent) thought this was important as a defense mechanism, to protect Iran from external threats and deter attacks.

The poll also asked Iranians what they thought was the single most important problem or challenge Iran currently faced. The greatest concern was perceived to be Iran’s economy, with 86 percent referencing issues like unemployment, youth unemployment, inflation, the high cost of living, poverty and corruption. Public perception of Iran’s economy has worsened since the initial poll, according to the study.

A survey taken in April 2018 suggested an increase from 69 percent to 72 percent in the view that Iran’s economy was in bad shape. Climate change was another area Iranians considered to be important, with 59 percent saying environmental damage was a pressing issue, and almost two-thirds very concerned that they themselves would be harmed by climate change in their lifetimes.

News consumption amongst those polled was dominated by television and social media, with 83 percent accessing information through domestic television channels and 66 percent getting news about domestic and international affairs through platforms like Instagram and Telegram. The survey also looked at media consumption habits in 2015 and noticed a marked increase in the number of people now using the internet to get news. A decrease in domestic and satellite television consumption was also noted during this period, with a small dip (2 percent) in the number of respondents watching the BBC and Voice of America.

Both studies asked those polled for their views on Iran’s political and military figures. GAMAAN’s survey asked its respondents who they would vote for president or leader of a political party in a free election, with the majority choosing Reza Pahlavi (37.9 percent), followed by human rights lawyer, Nasrin Sotoudeh 8.1 percent and reformist politician Mir Hossein Mousavi. The survey also revealed that despite Reza Pahlavi’s ongoing popularity, only 15 percent of Iranians were in favor of a constitutional monarchy, suggesting that while Iranians thought highly of him, the majority of those polled did not want to a monarchy to govern in Iran. Foreign Minister Zarif received 1.4 percent of the votes, with Major General Qasem Soleimani second to last with 0.2 percent choosing the Revolutionary Guard as leader.

GAMAAN’s data contrasted with Maryland University’s here too, which suggests that General Qasem Soleimani’s popularity is at an all-time high. Their survey found that two in three respondents held a very favorable opinion of the Major General, who is also the current commander of the Quds Force. Soleimani’s popularity may stem from his announcement in November 2017, shortly before the poll was taken, that ISIS had been defeated, when the organization lots its last key bastion in eastern Syria.