By John Irish and Arshad Mohammed

“It was to take stock of the dossier and to assess what our state of mind is,” a European diplomatic source said of U.S. special envoy Rob Malley’s conversation with the British, French and German foreign ministry political directors.

A second source confirmed that the discussion took place but offered no details. The State Department did not immediately respond to requests for comment.

The nuclear deal, formally called the Joint Comprehensive Plan of Action (JCPOA), was struck by Iran and six major powers and committed Iran to restricting its nuclear program in return for sanctions relief from the United States and others. Malley was a member of the U.S. team that negotiated the deal during the Obama administration.

U.S. President Joe Biden has said if Tehran returns to the pact, Washington would do so as well and would then seek to build a broader pact to also deal with Iran‘s development of ballistic missiles and support for proxy forces in Iraq, Syria, Yemen and elsewhere.

Trump abandoned the deal in 2018 and revived U.S. sanctions. Iran in 2019 begin violating the deal, including by enriching larger quantities of uranium to higher levels of purity.

The Biden administration has insisted Iran resume complying before it would. Tehran argues that Washington abandoned the agreement and should return before Iran does.

U.S. Secretary of State Antony Blinken has said the time it would take Iran to make enough fissile material for a single nuclear weapon has fallen to three or four months from over a year under the deal.

“From our perspective, a critical early priority has to be to deal with what is an escalating nuclear crisis as they (Iran) move closer and closer to having enough fissile material for a weapon,” White House national security adviser Jake Sullivan said at an event in Washington on Friday.

The talks with the British, French and German officials are likely only the first step in consultations that will ultimately bring in China and Russia, the other major powers in the pact, and, eventually Iran itself.

French President Emmanuel Macron was quoted on Friday as saying any new negotiations would be very “strict” and should include Saudi Arabia, Iran‘s regional adversary, Al Arabiya television reported. 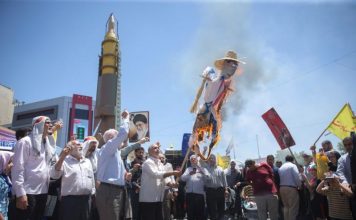