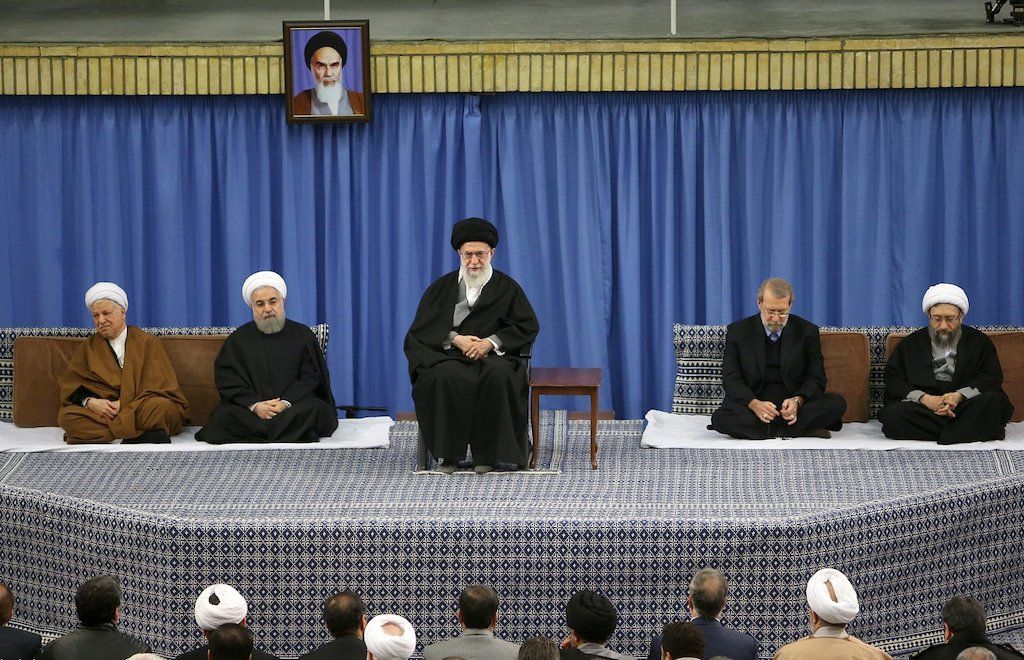 On 27th November, the Conservative Middle East Council (CMEC) hosted a wide-ranging discussion on the future of the Iran Nuclear deal at the House of Commons. Chaired by Richard Bacon MP, Chairman of the All Party Parliamentary Group on Iran, speakers included Con Coughlin, the Telegraph’s Defence Editor and Chief Foreign Affairs columnist and Nazenin Ansari, Managing Editor of Kayhan-London.   CMEC was founded in 1980 with the aim of  informing Parliamentarians and promoting their understanding of the complexities of the Middle East through orgnaising country visits as well as discussions with leading experts.  Below are remarks delivered by Nazenin Ansari.

I thank CMEC for inviting me to join the panel the today.

My presentation will focus on the situation inside Iran and its reverberations for JCPOA.

The JCPOA was published at a time when the sanctions against Iran had crippled the Iranian economy. In 2013, Iran had a negative 6.8 percent growth, whilst China and Russia were increasing their hold of the Iranian market, at the expense of the European countries and the US.

Talks between the US and the Islamic Republic had begun in earnest towards the end the second term of George W Bush and President Ahmadinejad’s term in office.  Resolving the nuclear issue became a focal point for both President Obama’s administration as well as that of President Rouhani, who had won office on the promise of removal of international sanctions against Iran and fully reconnecting it to the international financial system.

In a way JCPOA was heralded as a win-win situation for the Islamic Republic, the international community as well as the people of Iran.

We should also note that public debate within Iran in respect of nuclear energy had been prohibited since 2005..  After the publication of JCPOA a degree of debate was allowed as a way to garner support for its publication by the Rouhani administration.

Questions which the media in Iran had been been warned off since 2005, included: the overall economic, environmental cost/benefit of the nuclear programme.

Notwithstanding, was the attention and concern of ordinary Iranians preoccupied by the right to have nuclear energy? No.

Did they yearn for improved economic conditions? Yes

Did they hope for Iran to be connected to the international system? Yes.

However, complicating the situation from the Iranian side is the struggle between 2 mutually exclusive strategic outlooks with the Islamic Republic’s strategic and political decision makers.

For one camp Iran is a vehicle for an Islamic Revolution on a global scale; while for the other Iran is a country in need of sustainable development.  Is Iran a cause or a country?  Accordingly Iran and the Islamic Republic are mired in an existential struggle from within, which does not bode well for JCPOA.

Let’s look at 2 issues that crystallise these challenges:  the case of Nazanin Zaghari-Ratcliffe and the recent earthquake in northwestern Iran, which was deadlier than the one that destroyed Mexico City, three months earlier.

Yet last week, the Chief Commander of the IRGC, Mohammad Ali Jafari declared on state TV that IRGC is ready to rebuild Syria.  “Hezbollah must be armed to fight against the enemy of the Lebanese nation which is Israel. This issue is non-negotiable.”

For now, the Revolutionary cause remains the driving force in Iran today.

For how long more? That remains to be seen.

In a few years time, will we become aware of track 2 and track 3 talks taking place today?  I would not be surprised.