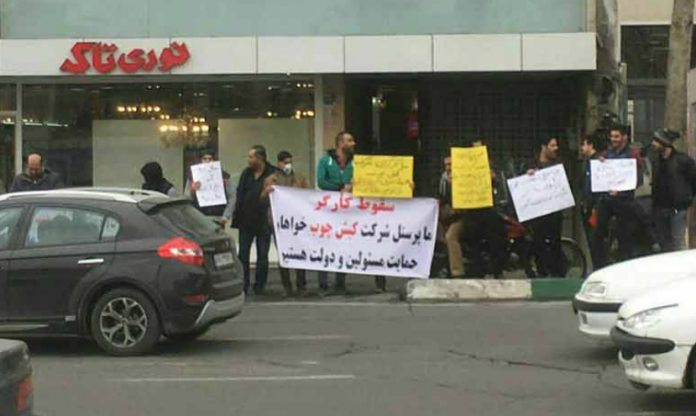 February 15, 2018 Labor unions around the country resumed their protests a day after the 39th anniversary of the Islamic Revolution on February 12. They were joined by students, office workers, and doctors. In total, more than 30 unions and groups have held nationwide demonstrations in the past three days.

Workers at manufacturing and industrial plants have held numerous protests in recent months to voice their grievances against unpaid salaries, the lack of job security and unsafe working conditions.

Workers at the Mahshahr Petrochemical Special Economic Zone [PETZONE], in the southwestern province of Khuzestan, held a protest in front of the human resources office demanding better job security and an end to discrimination against contract laborers. They chanted: “We mourn, we mourn. Today is the day of mourning. We mourn the uncertain lives of laborers.”

In addition, more than 150 contract laborers of PETZONE in Bandar Imam, Khuzestan Province, staged a protest in front of the Governor-General’s office on February 14 against discriminatory practices by the company regarding contacts, wages, insurance, and unsafe environment.

Employees and workers at Kish Wood Company whose salaries and wages had not been paid for up to 10 months picketed the factory in Tehran on February 12. One of their banners read: “The fall of the laborer. We, the employees of the Kish Wood Company, call on the government and the officials to protect our rights.”

The workers at Haft Tapeh Sugarcane Plant, Khuzestan Province, staged a collective strike over unpaid wages on February 14. According to the Free Labor Union of Iran (FLUI), more than 3,000 workers are concerned about their unpaid wages, particularly as the New Year, or Nowruz – on March 21 – approaches.

On February 12, a disgruntled medical orderly at Vali-e-Asr Hospital in Qom interrupted a speech by Labor Minister Ali Rabei, who was attending the launch of an emergency standardization medical plan. The worker shouted: “They have come under the banner of Islam. They plunder under an Islamic umbrella.”

Depositors of the Caspian Financial Institute, who lost all their assets after the company went bankrupt, held a demonstration on February 13 in front of the governor-general’s office in Rasht, capital of the northern province of Gilan. President Rouhani had promised to reimburse 98 percent of those who had lost their assets. The protesters chanted: “Rouhani is a liar, where is the 98 percent?”

Workers and drivers of the Sepidar Housing Cooperative Project staged a protest in front of Tehran City Hall on February 14. Some of them have been waiting for over five years to be allocated homes.

“Paloud Parsian Food Company has not paid over 160 of its workers in the past five months,” said Mohammad Amarlou, the general secretary of the Nishapur Workers’ House. Amarlou said that the situation for the workers had not improved, even though the company had done well financially. “The company has failed to pay its workers even though it has expanded its operation by exporting goods to Tajikistan, Afghanistan, Kurdestan, Iraq and some of the Gulf states,”Amarlou explained.

The workers at Chouka Iran Wood and Paper Industries, in the province of Gilan, have been concerned about a sharp drop in the company’s production, which may lead to loss of many jobs. The company had closed down for one year, but it resumed operation in November 2016 after a 10-day strike by the workers. “After what we’ve been through, we don’t want to experience a similar crisis,” the workers said. The Islamic Work Council had been managing the Isfahan Tile Company until it had to shut down a month ago due to a lack of funding. The company’s workers demonstrated in front of the Governor’s office on February 10. They spoke to ILNA, theIranian Labor News Agency, on February 13 about their fears of losing their jobs. “We are worried about the future of the 350 workers of this production company. We understand that the company may not resume production. The plan is to send the workers to the unemployment line,” a representative of the Islamic Work Council told ILNA.

The city of Nishapur has not paid its 850 workers for the last two months. According to labor activists, the city has run out of money. The workers have not been paid overtime, or for working on weekends. The city of Takestan, in northwestern Qazvin Province, has laid off 97 of its workers and failed to pay their wages for 18 months. These workers are hoping to return to work at one point in the near future. Some of them have been forced to peddle goods in the street in order to make a living. Workers at Qazvin Glass Company are owed at least two months wages. The company has also failed to pay the insurance premium for over 280 workers.

More than 100 former store owners at the landmark Plasco shopping center, which was destroyed in a fire in January 2017, staged a protest in front of the Majlis, or Iranian Parliament, on February 14. They are angry with the Bonyad-e Mostazafan va Janbazan — the Foundation for the Oppressed and Disabled (MFJ) — and other government offices for failing to compensate them for their financial losses. On February 13, a group of students and recent graduates in engineering at Mashhad University, Khorasan Province, demonstrated in front of the provincial office for road and urban development. The event was part of a nationwide protest against new engineering regulations which impose certain restrictions on professionals in the field. A group of students at the University of Urmia, in the province of West Azerbaijan, staged a protest in front of the university president’s office on February 15 against the high cost of tuition.

Doctors at Imam Reza Hospital in Larestan, Southwest Fars Province, took industrial action against the current salary cap. The Larestan School of Medicine released a statement which read: “On February 14, the doctors and specialists in the Lar township staged a protest against unpaid salaries and unfair employment practices. Some of these doctors have not been paid for an entire year. There have been some efforts to resolve the issue. And thankfully there haven’t been any disruptions to the services at the hospital mainly due to the intervention of Dr. Karimi, the president of the medical school, and Dr. Akbarzadeh, the deputy head of therapy.” On February 13, a group of fishermen from the city of Ardal, southwestern Chaharmahal and Bakhtiari Province protested in front of the governor’s office. They called for an investigation into the causes of an oil pipeline explosion which contaminated water reservoirs, fish farms, and the surrounding land.

On February 14, doctors involved in the “Health Reform Program” staged coordinated protests in 115 cities around the country. These doctors are not allowed to open their own practices because they’ve enrolled in health insurance schemes. Over 1,500 doctors were to take part in the demonstration. These doctors had announced earlier that they would not treat non-emergency cases.

Dozens of teachers in Sanandaj, northeastern Kurdestan Province, protested on February 13 against the dismissal of a number of their colleagues, unpaid salaries, and poor working conditions. A number of doctors, radiologists, and sonographers staged a protest in front of the Ministry of Health in Tehran. They were objecting to the so-called “Self-Referral” scheme. “Such schemes benefit an exclusive Mafia-like gang of medical equipment importers that aim to monopolize the market to the determent of radiologists and sonographers,” one of the protesting doctors said. Iraj Fazel, the head of the Medical Council, reportedly met with the protesters and promised to bring their concern to the attention of the Health Minister, Seyyed Hassan Ghazizadeh Hashem.

Meanwhile, the protesting radiologists were reportedly threatened by institutions closely linked to the Health Ministry. Some radiology centers have reportedly been shut down since the protest.