During the reign of the late Mohammad Reza Shah Pahlavi, Iran and Iraq signed an agreement which designated the Shatt al-Arab River (Arvand Rud in Persian) as the center-line (Thalweg) between the two countries’ borders. The Shatt al-Arab is formed at the point where the Euphrates and the Tigris meet – in the town of al-Qurnah in the Basra Governorate of southern Iraq. It is 200 kilometers (120 meters) long. The precise boundaries of the two countries run across the deepest points of the river bed. 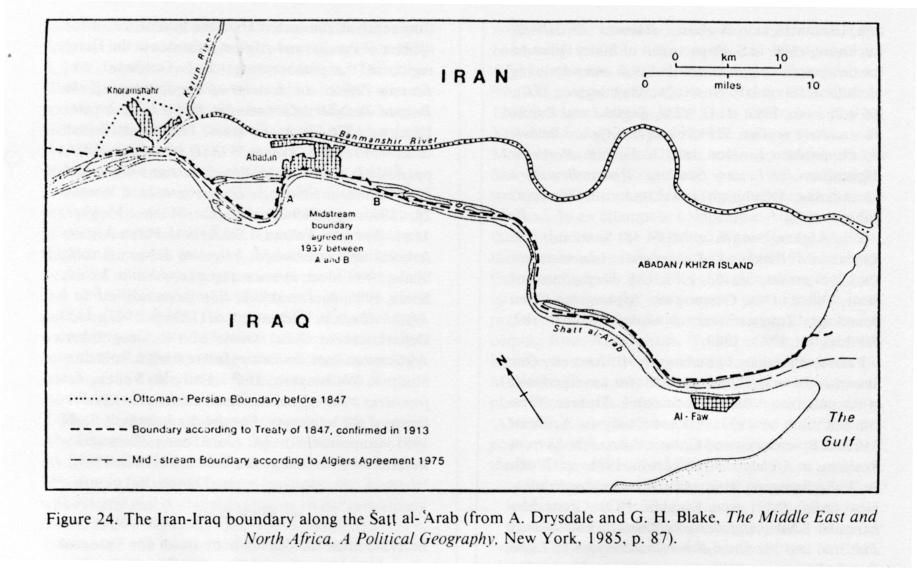 In the original negotiations, Iran’s Foreign Minister Abbas Ali Khalatbari and his Iraqi counterpart Saadun Hamadi represented their respective countries. The agreement called on Iran to stop arming Iraqi Kurds. In return, Iran took control of the shipping corridor along the deepest points in the Shatt al-Arab River.

Although marked by metal pylons, the deepest points along the Thalweg corridor fluctuate depending on the seasons and water conditions. The precise borderline has always been a point of contention between Iran and Iraq.

The Shatt al-Arab Thalweg corridor is only one of the border disputes between Iran and Iraq. Disagreements over territorial demarcation date all the way back to the Ottoman Empire and to the period before the creation of modern Iraq. They have even led to armed conflicts from time to time.

The Islamic Republic has consistently stated its commitment to the 1975 Algiers Border Agreement. However, Iraq has refused to recognize the accord since the end of the war with Iran in 1988 and the signing of UN Resolution 598.

Despite their apparently friendly relations with Iran, post-Saddam Iraqi governments have always challenged the treaty. The recent proposal by Iraq to revisit the Algiers agreement, therefore, comes as a great surprise.