Every year, May 17 marks the  International Day Against Homophobia, Transphobia, and Biphobia. It aims to raise worldwide awareness of LGBT rights (lesbian, gay, bisexual and transgender). While most Western countries recognize the LGBT community’s legal rights, some 80 developing nations continue to criminalize consensual gay relationships.

The authorities in Beirut, Lebanon canceled the first-ever gay pride march in the Arab world which was scheduled to take place in May in that city.

Melody Safavi, one of the two co-founders of the Swedish fusion pop band Abjeez, says one doesn’t need to be a member of the LGBT community to stand up for their legal and social rights. Abjeez’s song “Bezaar” (“Let me be”) promotes greater understanding and tolerance of those with different sexual orientation.

Q: Abjeez advocates LGBT rights in their work. Can you talk about that?

Yes. We use humor in our songs to deal with issues that most people might find difficult to talk about, including LGBT rights. Despite greater understanding and worldwide support for the LGBT community, the subject remains a taboo in many cultures including ours.

Many people are still very intolerant and judgmental of people with different sexual orientation. For instance, a large segment of Iranian society still believes that homosexuality is a disease or an addiction that can be cured by medication, therapy, and diet!

There are also those who sidestep or avoid the issue entirely, for fear of having to express an opinion about it. Meanwhile, the families of many people in the LGBT community live in complete denial of their loved ones’ sexual orientation. They don’t want to know about it.

So it is vital for artists to highlight such social issues in their works. But it is not enough to discuss the problem. An artist starts a dialogue which hopefully will lead to greater understanding and change in attitude. 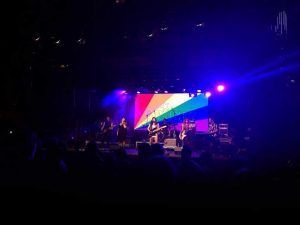 Q: Which of your songs deal specifically with LGBT rights?

We address LGBT rights in the song “Bezaar” from our second album. The song, however, is about people who feel discriminated against and marginalized because of their lifestyle choices. The singer tells society: “Let me be who and what I am, and if you think I’ve sinned, then let me do penance my way. It is none of your concern.”

The Iranian LGBT community invited us to Turkey to perform at their Nowrouz event. Unfortunately, we couldn’t go due to prior commitments, but we sent a message of support to the organizers. We did perform at the gay pride celebration in Toronto, Canada last year.

Q: Is the LGBT community more sensitive to social issues? What is the relationship between the artistic and LGBT communities?

Most Iranian artists are not vocal about LGBT rights, because they think the authorities would harass them if they were to speak out. Those of us who live outside Iran can speak about the issue freely and without fear. Although not persecuted in the West, the LGBT community must fight for its rights all the time.

Q: As an artist, how do you view people’s treatment of the LGBT community?

I can’t give you an accurate view of that, since I’m not a member of the LGBT community. Also, I live in New York City where being different is not an issue. There are, however, many places in the U.S. where religion and tradition rules. Members of the LGBT community suffer prejudice in such areas. Iranian-Americans don’t discriminate against people with different sexual orientation, at least not openly. I’ve never witnessed any blatant discrimination against the LGTB community. I’m fortunate enough to have known many people with different lifestyle choices, some of whom have heart-wrenching stories. 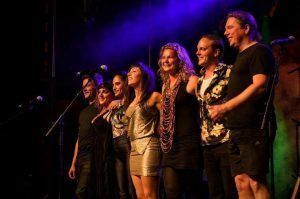