“Reza Shah, Bless Your Soul”: This was the repeated chant that was heard during the 6 days of protests throughout Iran. They were referring to Reza Shah the Great, the founder of the Pahlavi dynasty and the man who saved Iran from the abyss in 1921. He was also responsible for setting Iran on a path of modernization. Almost all of the manifestations of a modern state infrastructure within the country, such as schools, universities, the regular army, its modern judiciary and banks, were established by Reza Shah.

The chants, which appear to suggest a growing level of support for a time before the Mullahs governed Iran, could be heard even in small provincial towns, and significantly, in Qom, the bedrock of Iran’s Shia clergy and the cradle of the 1979 Islamic revolution.

Last Monday, less than four months after the protests erupted and protesters chanted in support of the former king of Iran, a mummified corpse was found inside a holy Shia shrine near his former tomb. The corpse bore an uncanny resemblance to the last published picture of the revered monarch inside his coffin.

News that the discovered dead body could be the missing remains of the late king quickly went viral after a construction worker posted his selfie with the mummified corpse.

Iranians are inherently a mystical people, often looking for signs of divine intervention to embolden them. The day the body was discovered coincided with the eve of the anniversary of Reza Shah’s coronation. The parallel was interpreted as a divine intervention. 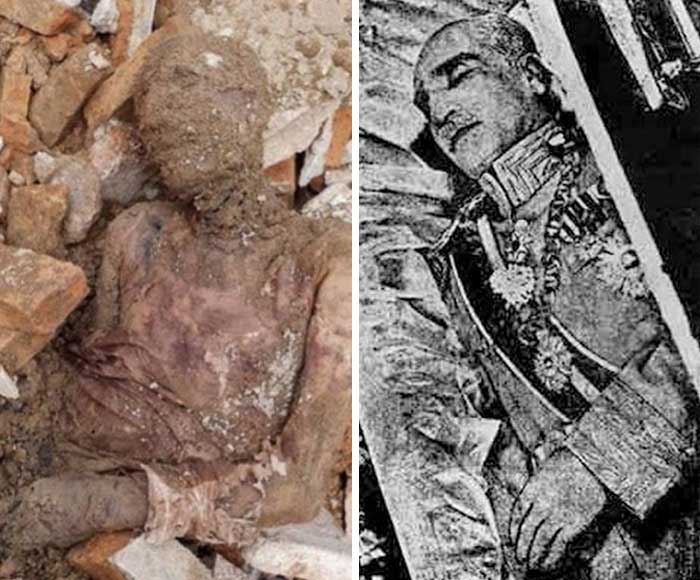 “Great King, your grandchildren called out for you and you showed yourself on the eve of the anniversary of your coronation,” was the message on Iranian social media. To most Iranians, this was no coincidence. Iranian youth have become increasingly aware that the revolution their parents fought so hard for may not have yielded the results they so desperately wanted, and have started to look to the founding father of Modern Iran for answers. To young Iranians, that symbolic search has culminated in something of a miracle, in which Reza Shah has heard their cries and revealed himself to them.

Reza Shah’s tomb was demolished by Ayatollah Khalkhali, sometimes referred to as Iran’s “hanging Judge,” shortly after the revolution. Khalkhali insisted that he wanted to make a public toilet in its place. It took overzealous revolutionaries more than twenty days to completely destroy the mausoleum, but they never found Reza Shah’s remains.

Khalkhali claimed that the deposed king must have removed his father’s corpse before fleeing Iran. The claim was strongly denied by the former queen, Empress Farah, in the documentary from Tehran to Cairo, aired on Manoto TV. The whereabouts of the body remained a mystery until now.

Crown Prince Reza Pahlavi, now living in exile in Washington, is confident that these are his grandfather’s remains. He issued a statement calling for the body to receive proper burial, in accordance with the respect and dignity it deserves.

“If not as the father of modern Iran or as a king, but if only as a simple soldier and servant of his country and his people. Reza Shah must have a marked grave in a location known to all Iranians,” said the Crown Prince in his statement.

The discovery has put the ruling clerics in a difficult position. If they give Reza Shah a proper burial in a marked grave and a known location, they risk the grave becoming a focal point for further gatherings and protests. The clerics have already had to move columns of security forces to the area to prevent fervent crowds from coming near the site. However, if they refuse to follow established protocol, it will be tantamount to an admission that Reza Shah’s popularity poses a direct threat to their government.

If they destroy the body as they wished to do in 1979, they risk a public outcry that could also have major repercussions for the government, which will have to deal with a growing animosity towards clerical rule in the country.

The only other option for the regime is to deny that the mummified corpse is that of Reza Shah, which would require bringing in independent DNA experts. If the body is proved to be that of someone else, the government will then have to face questions about who else could have been mummified and buried near the former tomb of Reza Shah. From a political perspective and the government’s own, the discovery of the body represents something of a diplomatic disaster.

It seems that 74 years after Reza Shah’s death, the Ayatollah’s nemesis, who stopped unwanted clerical interference during his lifetime, still looms large and has once again check-mated the clerics.