For many Iranian emigres, the Islamic Revolution of 1979 is an event that they would rather put behind them. The memories can be much too painful. Yet for Navid Khonsari, who was born in Canada and raised in Iran until the Revolution, the only way out of the trauma is to work through it.

Khonsari is a video game developer who has contributed to the Grand Theft Auto and Max Payne series, as well as to the new Resident Evil installment. When he set out to address the moment in history that changed Iran forever, he chose to do so with the medium he knew best. The result was “1979 Revolution: Black Friday.” 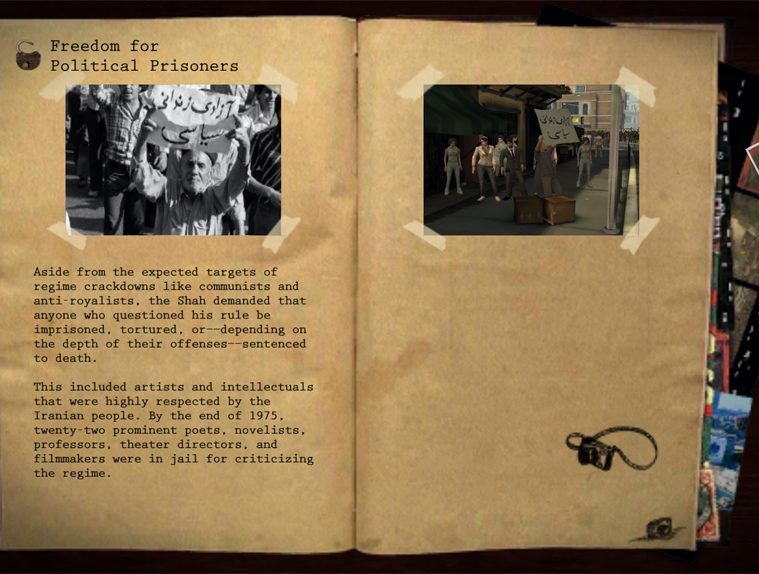 1979 Revolution is a video game that’s playable on Windows, Mac and Android. The player controls Reza, a young photographer who has just returned to Iran after spending time abroad in Germany.

Back home, he sees that much has changed. The Cinema Rex fire of 1978, an act of arson that has killed over 400 people in Abadan, Iran, has just taken place. People are saying that the Shah’s secret police are responsible, though no one knows for sure.

The streets of Tehran, where Reza lives, are teeming with protesters who are clamoring for the Shah’s removal. “This is not the Iran you left a year ago,” Reza’s friend Babak tells him in the first scenes.

Khonsari and his team have chosen their main character carefully. They have used his year abroad as a plot device. It allows Reza to explore Tehran’s crowded streets and to learn about the Revolution at the same time as the player of the video game does.

“Reza is somebody we wanted to be on the outside, who’s been away for a while,” says Khonsari in an interview. “Reza connects with Iran, and he’s Iranian, but he’s been gone for a year, and a lot has happened in Tehran.”

Reza’s photography also serves a purpose. All through the game, the player is prompted to take photographs of various protest scenes. These in-game pictures are then shown alongside actual photographs taken in Tehran in 1978 and 1979, together with written explanations of the real-world events that were taking place.

“We really wanted to make sure people realized that this was real,” Khonsari adds. “Being able to take a picture and see the real picture beside it, in the game, has been an extremely powerful tool.”

To stay true to history, the game sometimes gets very dark. It’s possible, for example, to fail an interrogation sequence as a political prisoner in Evin Prison within the first 10 minutes of playing. Doing so results in Reza being tortured to death by Assadollah Lajevardi, the game’s main villain, based on the man who was the warden of Evin after the Islamic Revolution.

“The goal was to be as authentic as possible, but also to give you ownership, so that the choices that you make in the game have real impact,” Khonsari explains.

In the game, Lajevardi is voiced by Iranian-American actor Navid Negahban. Playing the character was, for him, a tough experience. “This was a real person who really believed he was doing a good thing,” he says in an interview.

Negahban was nominated for the role in this year’s Bafta Game Awards. For both him and Khonsari, achieving this level of recognition is part of the reason why they made 1979 Revolution – not to earn personal accolades, but so Iranians and non-Iranians around the world know what happened in Iran during those years.

“If there’s a sense of understanding of the history, if there’s a sense of compassion toward some of the decisions that were made, then we have a much clearer picture of what took place,” Khonsari says. “We can try not to polarize this, but actually embrace it, and come to understand who we are as Iranians.”

As for what he hopes to contribute by taking on his role in the game, Negahban says, “Just for people to know what happened in Iran, what we went through. That’s it.”