“The Quest for Authority in Iran: A History of the Presidency from Revolution to Rouhani” is a new book that delves deep into the workings of the presidency in post-revolutionary Iran. Written by Siavush Randjbar-Daemi, a modern Middle Eastern history lecturer at the University of St. Andrews in Scotland, the book is a comprehensive look at the track record of Iranian presidents from Abdolhassan Banisadr to Hassan Rouhani.

Kayhan Life caught up with Siavush for a conversation about his book, his methods of analysis and his personal perspective on the topic. 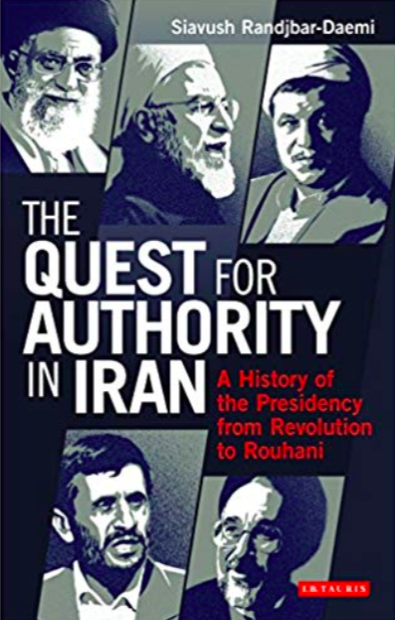 Q: You have said that this project initially started as your Ph.D. dissertation. Now that it is a book, can you summarize in a paragraph or two what a reader can learn from it?

A: The book’s aim is to offer a political history of post-revolutionary Iran through the lens of a study of its presidents, from 1980 to 2017. The reader will probably be able to gain a better understanding of the processes which led Iran to have a directly elected president, understand the powers and limitations of the presidency, observe how the political system as a whole has come to terms with this innovation in Iranian statecraft and gain an appreciation for the legacy of each.

I believe this to be the first book of its kind. None of the academic political histories of the Islamic Republic have focused on the presidency before, despite the fact that it is one of the public faces of a rather opaque state system, and one which is constantly in the spotlight of the media and public opinion, both inside Iran and abroad.

Q: Is your book a critique of how post-revolutionary Iran struggled to set up a functioning governing system, or a chronicle of how it developed?

A: My book aspires to provide more insight into the nature of the post-revolutionary Iranian state by chronicling the presidency. I believe that the Western framework [and definition] of the state is not yet able to explain the contemporary Iranian [reality]. The actual performance of institutions is still a work in progress, and has been since the last constitutional revision of 1989.

The president’s powers are defined more on paper than in practice. As the book explains, each president has had to grapple with the vexing challenge of enforcing his roles, as defined in the Constitution, against a constant stream of attempts to limit them, or to devolve some of them to other bodies. This has been a conundrum faced by all presidents, from Banisadr to Rouhani, and has usually taken up a considerable amount of their time and energy whilst in office.

Q: A substantial part of the book is dedicated to how various factions, under different presidents and prime ministers, jockeyed for power. Is there anything distinctive about post-revolutionary Iran in that respect?

A: Iran is an anomaly in that it is the only presidential system of its kind which doesn’t feature structured, distinct political parties. Its role model, the French Fifth Republic, features very distinct parties. In Iran, there is a fluid medley of ‘factions’ which are in effect informal associations between politicians, often based on common experiences, a common profession, or having been part of certain circles at the start of the Islamic Republic and having stuck together through thick and thin.

Presidential candidates in Iran are almost never the product of party conventions, or of an internal vote among party members, as is the case in France, or the United States. There are no primaries in Iran; candidates are chosen by usually small circles, and then gather the informal hemayat – or support — of various factions and organizations. But we should be cautious to equate factions with parties, as the media often does. Unlike the latter, factions can split when supporting a given candidate, and re-unite when the elections are over, and so forth.

In my book, readers will notice that there is virtually no pattern; each candidate has ascended to the post in very different circumstances and ways. One key step in this process is the highly limiting role, in terms of even internal pluralism, of the Guardian Council, which often scraps its own rulebook, and at times bans candidates who have been past presidents, as occurred in 2017 and 2013, from running again. This is highly distinctive, and makes Iran very different from other political systems featuring similar presidential races.

Q: In your book, you write that the introduction of the presidency “marked an absolute innovation within the context of Iranian political culture: for the first time in the country’s history, a member of the senior political establishment was to be elected through direct, nationwide elections.” You also write: “As the Islamic Republic approaches its fourth decade of existence, the exact positioning of the presidency within the state system remains a contested and unresolved problem.” Based on your observations, which system has served the Iranian people better, the monarchy or the presidency?

A: That question does not have an easy answer. I believe that the directly elected presidency has brought more political awareness in the Iranian people, as we all witnessed in the summer of 2009.

The current Iranian system is one which can, in the most optimistic case, be defined as ‘limited pluralism.’ The Pahlavi system never succeeded, at least post-1953, in bringing about elections which featured such levels of popular interest and arousal, notwithstanding the limitations on choice discussed above.

I witnessed two of the elections I describe, the ones of 2005 and 2009, from close range in Iran. The scene in the last couple of weeks before the 2009 election in Tehran was truly remarkable, with almost every topic under the sun coming up in continuous street debates. Parliamentary elections under either system, with the exception perhaps of the 1980 or 2000 ones, would rarely have produced such fervor, open-air debate and involvement by society.

At the same time, Iranian presidents are the only ones in the world who are non-ceremonial, directly elected and not the most powerful figure of the state. A pattern has emerged under President Rouhani, which results in them turning into lame ducks at the end of their second term in office.

The Shah was, on the other hand, effectively acting as a permanent authoritarian president. He would always be in office,  and have granular control over the state. The entire state system hinged on him, and it was strong when he was at the apex of his mental abilities, in the 1960s. It weakened irreversibly when he became weak, physically and spiritually, at the end of the 1970s.

Q: How much of the initial lack of ability to cement a well-functioning governing system was due to Khomeini’s own inability to call the shots and come out clearly in favor of one side or another?

A: I believe that circumstances in Iran throughout the 1980s worked against the possibility of adequate ‘institutional architecture.’ The deep confrontation between the Islamist front and the other revolutionaries – the revolutionary activists of secular and other persuasion who progressively separated from Khomeini – continued until 1982-83. The war with Iraq from 1980-88 suspended all possibility of normal economic development, and necessitated subsidy and  rationing instead. Despite his ability to maintain overall control over the state until 1987-88, Khomeini was ageing, and could not exert ‘party discipline’ of any kind. The single party was dissolved in 1987.

The factionalism that emerged was debilitating for Khomeini, as he tended to favor the ‘left’ flank of his supporters, but could not throw the ‘right’ flank, some of whom had been instrumental in the success of the Revolution, under the proverbial bus. So, the first decade was a burned one in terms of political development – there was simply no opportunity to engage with this.

The second decade was far more interesting, with the initial reform of the constitution, which led to the strengthening of the presidency, the initial communion of interests and power sharing between Rafsanjani and Khamenei, the rise of Khatami and more. I don’t think this process has yet come to an end. The Islamic Republic keeps moving into new chapters at the end of each presidency, and has yet to really reach some point of stability since 1989.

Q: You seem to imply that from the governance perspective, affairs improved by the time people like Khamenei, Rafsanjani and Khatami came to power.

A: It depends on what you mean by ‘affairs.’ I would say that all presidents, except perhaps Ahmadinejad, benefited from a honeymoon period in which their own personal ambitions and enthusiasm for the job, coupled with popular support deriving from at times strong electoral performances, led to several months, or even years, of improving socio-economic conditions. But obstacles almost always then hit the road.

We see that clearly with Rouhani — the high expectations brought about by his pledge to solve the nuclear issue generated much excitement and hope, as did Rafsanjani’s Sazandegi initiative in 1989 or Khatami’s Eslahat drive in 1997. But the internal dynamics of the Islamic Republic, or adverse international conditions, then caught up. All of this will probably be observed by whoever will take up the mantle of the presidency in 2021. They will want to avoid the pitfalls of his predecessors.

Q: The book does not focus much on the role of ordinary people in shaping, or trying to influence, policies. Why was there not more attention given to them?

A: You are correct in stating that the book is a study from ‘above.’ One of the reasons was the difficulty in finding reliable sources.

I hope that one day, the mass of letters and petitions which were handed over amid much fanfare to Ahmadinejad during his regional trips, or are probably being sent to Rouhani more quietly these days, will at least partially be published. This will allow an analysis of the extent to which those recommendations have been heeded, if at all.

During the preparation of my book, I was always intrigued by the considerable amount of people who do not take part in elections, thereby indicating their rejection of the whole process, or their discontentment with the range of candidates. During the crucial second round in 2005, around 4.5 million voters in Tehran alone chose not to vote, thereby considerably influencing the final outcome.

I do provide an inkling of ordinary people’s demands and aspirations during my description of the various campaigns, which is when candidates have been more attentive to popular demands. I will try to focus more on these aspects in future revisions of the book.

For more information on the book, please visit here.