Dr. Biparva makes it clear in the introduction to the book that his reason for taking on the project is not to idolize Bakhtiar. More than 30 articles in the collection have previously appeared in various publications. This is the first time that they are compiled in one place to mark the 40th anniversary of Prime Minister Bakhtiar’s brief term in office (January 4 to February 11, 1979).

The collection offers a unique critical view of what has transpired since the rise of the Islamic Republic to power in Iran. What lessons can we, as a nation, learn from the events of the past 40 years? What legacy have they left for current and future generations?

Dr. Biparva and some of his friends and associates set up the Washington chapter of the National Front of Iran (an opposition political organization founded by former Prime Minister Mohammad Mosaddegh in 1949) shortly after Bakhtiar left Iran for France in 1979.

“If we were to focus only on Bakhtiar’s efforts as Iran’s Prime Minister, then what stands out the most during those brief 37 days in office was his unwavering commitment to the concept of the separation of religion and state,” Biparva writes. “Bakhtiar believed that the pairing of religion and state prevented the establishment of democracy. He argued that Iran’s only path to progress was through democracy. We have witnessed the disastrous effects of the merging of the state and religion in the past 40 years. Religious rule has destroyed Iran, ruined the economy, and isolated the country from the rest of the international community.”

“Bakhtiar believed in the rule of law,” Biparva notes. “In stark contrast, those who are in power in Iran consistently violate the laws they have created. A complete disregard for the law has plunged the country into chaos. Bakhtiar was also one of the few people who exercised political fairness.” 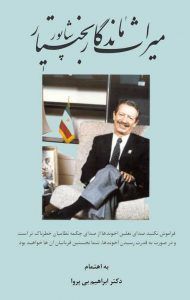 “Bakhtiar had a strong sense of duty. Otherwise, he would not have accepted the responsibility of forming a government under such a turbulent political climate,” Biparva notes. “He was a staunch critic of Mohammad Reza Shah’s policies, which resulted in his imprisonment for six years, and his being banned from leaving the country for 10 years. However, his sense of duty compelled him to respond to the call by the Shah to lead the government under unusual and difficult circumstances. It was to be the last government of the Pahlavi era before the Islamic Revolution.”

“Bakhtiar was virtually alone during that period. Many of his friends in the National Front of Iran abandoned him, and he got no support from secular groups in Iran either. There were many reasons Bakhtiar and his government did not get much support, including personal disputes, political rivalries, and even jealousy,” Biparva explains. “The central committee of the National Front of Iran accused Bakhtiar of making a unilateral decision and acting without their consent. That is why they expelled him from the party after he became prime minister.”

According to Kourosh Zaim, one of the current leaders of the National Front of Iran, the central committee did not have the votes to expel Bakhtiar, so its ruling was not binding.

Biparva points out: “In those days, many students embraced revolutionary ideas. Bakhtiar was a staunch advocate of the rule of law, which did not find much support among Khomeini’s followers, who favored revolutionary ideas. There were also those who accused Bakhtiar of having sold out to the Shah. They did not believe that the Shah intended to establish democracy in Iran. Bakhtiar argued that being appointed by the monarch, like all other prime ministers before him since the Constitutional Revolution (1905-11), prohibited him from acting against the Shah’s governing regime.”

“The role of intellectuals in a society is to ask questions and find the right answers. However, contrary to traditions, Iranian intellectuals followed Khomeini blindly in months leading to the Islamic Revolution,” Biparva notes. “Fortunately, Bakhtiar’s ideas are becoming increasingly popular among Iranian youth these days. Hopefully, future generations will not make the same mistakes.”