Abbas Amanat‘s “Iran: A Modern History” is the culmination of decades of patient and careful scholarship. For those who may be intimidated by the 1,000-page opus, Amanat writes in engaging prose, and offers a wonderful insight into Iran’s rich cultural and political history. The book is divided into four clear parts, giving readers the option of choosing which historical period — whether early modern or modern — they wish to immerse themselves in.

Amanat sets out to challenge the selective amnesias of Iranian historiography. Covering a period of more than 500 years, his book encapsulates and examines the tensions between the competing visions of Iran.

The author avoids the notion of a single Iranian “modernity” and instead traces the roots of Iranian “modernities,” reminding us that Iran was made and remade in the last half-millennium. Often, Iranian modernity is defined solely in connection with the tumultuous events of the 20th century.  The Islamic Revolution or the advent of the Pahlavi state are identified as watershed moments. Amanat shows us that this is misleading.

One of the book’s pleasures and strengths is its weaving of cultural and literary anecdotes and discussions into the wider narrative of Iranian political history. Amanat’s discussion of the “Persianizing” of European culture in Iranian literature and aesthetics avoids the frequently dismissive categorization of the Qajar period as “decadent.” The significance of Iranian artists and writers such as Sadeq Hedayat, Forough Farrokhzad and Abbas Kiarostami is by no means overlooked. Nor do the writings of Jalal Al-e-Ahmad, author of Gharbzadegi (“Westoxification”) escape Amanat’s critical eye. 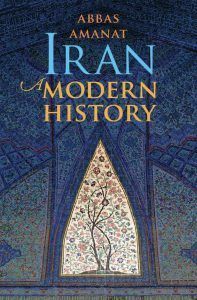 Amanat also highlights the Shia context of Iranian history, charting how Shi’ism developed into a source of national identity and social cohesion. He examines the importance and continuity of Shia notions of kingship introduced by the Safavids, which the Qajars were later to inherit. As he argues, the failure of Nader Shah Afshar (who reigned from 1736 to 1747) to grasp the significance of that Shia context contributed to his demise. Nader Shah had attempted to deviate from it with a call to relinquish Twelver Shi’ism and adopt the Ja’fari creed instead, which was “devoid of anti-Sunni exclusivity,” Amanat writes. This only served to delegitimize his rule among the Persian urban elite, and did nothing to endear Iran in its potential intrusions in neighboring Sunni areas.

While highlighting their loyalty to the notion of political non-intervention, Iranian Shia clerics, who gained so much notoriety in the West during the Islamic Revolution of 1979, emerged as increasingly autonomous actors during the mid-19th century, with the Tobacco Protests. Though Persian kings presented themselves as the defenders of the faith, Amanat convincingly argues that the existence of the Mahdi in Shia beliefs and Shia concepts of authority proved to be a “major obstacle to temporal legitimacy.”

His chapter on the Constitutional Revolution of 1905 is of critical importance in understanding how Western-inspired notions of governance converged with Iranian messianic tendencies to express demands for popular representations and the end of arbitrary rule. Despite his heterodoxy and novel conceptualization of velayat-e faqih (“governance of the jurist”), Amanat argues, Ayatollah Khomeini does not emerge in a historical void.

Though his exploration of Iranian dissent ends with the Green Movement of 2009, Amanat hints that Iranians may have become disillusioned with the prospect of freeing themselves from the status quo. Perhaps the unrest and protests of December 2017 are proof that the active Iranian appetite for change is still there.

*“Iran: A Modern History” is published by Yale University Press.