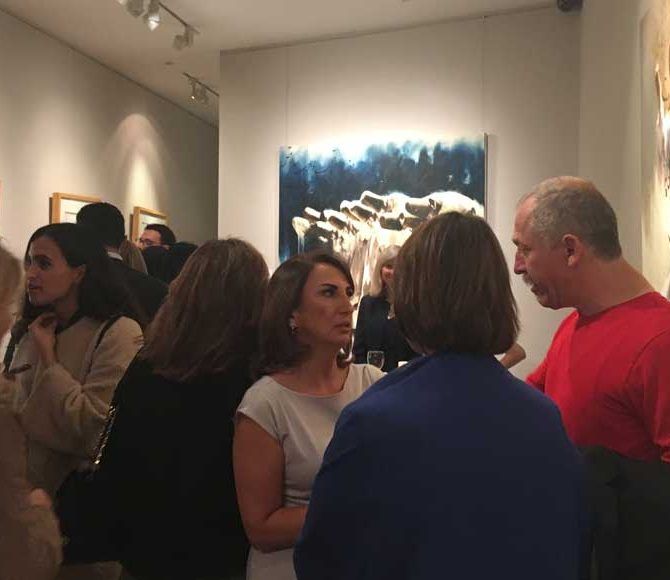 The Iranian artist Hossein Irandoust Moghadam was born in 1978 in Iran to an Iranian mother and a Chinese-Iranian father. He was recently in London for an exhibition at London’s Gallery 8, where he sat down with Kayhan Life for a brief interview.

Irandoust’s art is a fusion of poetry and spirituality. “My grandfather was a Chinese engineer who emigrated to Iran and settled in Lahijan, in the province of Gilan,” the artist recalled. “He opened a tea plant, married an Iranian woman, converted to Islam, built a mosque and made a pilgrimage to Karbala. That’s how I became familiar with the culture of the Far East.”

Irandoust is particularly inspired by the poetry of the 13th-century Iranian Sufi mystic Jaläl ad-Dïn Muhammad Rümï, better known as Mowlana, and by the Sufi ceremonial dance, Sama, which means ‘listening’ in Arabic. As part of the Sama ritual, a dancer stretches out both arms, starts spinning around in a circle (Sufi whirling), and enters a state of blissful trance. Although Sama predates Islam, Rumi has been credited with its creation. The oldest reference to Sama is found in the Torah, in connection with King David.

“For me, Mowlana is a matter of faith. Among Sufi poets, he is unique in that he is both traditional and unconventional,” Irandoust explained.

“Mowlana is an enigma,” the artist added, “and his poems are difficult to understand. One must study his work for years before one can grasp its true meaning.”

Irandoust explained that Sama “means dancing around the beloved. One enters a state of trance and rejoices in divine grace. The dance is a direct conduit to God. One reaches him through music and poetry.”

In his paintings, Irandoust depicts whirling Sufis in traditional attire dating back to the Ottoman Empire. Sama, however, can be performed in any outfit¸the artist noted.

“Unfortunately, people would not consider someone who performs Sama in the street wearing regular clothing as a legitimate Sufi,” he said. “They wouldn’t make the connection to Mowlana.”

He compared Sama to a drop of water “that creates a tidal wave swallowing up everything in its path.” He pointed out, however, that “everyone reacts differently to the experience.”
The artist has been studying Zen, Taoism, Buddhism and Shintoism for years.

“My studies have greatly influenced my style of painting, which is a combination of Zen and realism,” Irandoust said.

“If we were to study various faiths without any preconceived beliefs and prejudices, we would realize that they all seek the same truth,” he added. “From Lao-Tse (the founder of Taoism) to Zoroaster, they all brought us the same message.”

The well-attended exhibition at London’s Gallery 8 was organized by Cultural Signatures, a London-based arts, music, culture and charity center.