Two ancient wine jugs from the Sassanid Empire (224 A.D. to 651 A.D.) have been discovered in the city of Ashtian, in Iran’s central Markazi province. This significant find is a valuable addition to the province’s rich cultural heritage.

One of the jugs is severely damaged, while the other is almost intact, according to Zahra Ahmadipour, the director of the Iran Cultural Heritage, Handicraft and Tourism Organization (ICHTO).

Jugs of this kind were traditionally used to store food and wine. In the Islamic Republic, however, the word “wine” is not used in describing these ancient objects.

Prior to the Muslim conquest of Persia in 633 A.D., Iranian wines were recognized for their superior quality. There were numerous wine and beer distilleries across the country. According to ancient accounting ledgers, workers were partly paid with wine and beer.

A jug containing traces of a 5,000-year-old wine (pictured above) was discovered during an archaeological excavation in Iran’s northern Zagros Mountains in 1960. Archaeologists also found a number of large jugs in 2005 at the site of an ancient wine distillery belonging to the ancient Achaemenid Empire (550-330 B.C,) The present whereabouts of these artefacts is unknown. 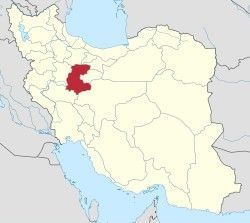 Wikipedia states: Markazi Province, the medieval Iraq-i Ajam, more recently Arak, is one of Iran’s 31 provinces. The word ‘markazi’ means ‘central’ in Persian. Its population is estimated at 1.41 million. Its present-day borders date to 1977, when the province was split into the current Markazi and the Tehran Provinces, with other portions being annexed by Esfahan, Semnan Province, and Zanjan. The main cities of the province are: Saveh, Arak, Mahallat, Zarandiyeh, Khomein, Delijan, Tafresh, Ashtian, Shazand (previously known as Sarband) and Farahan.