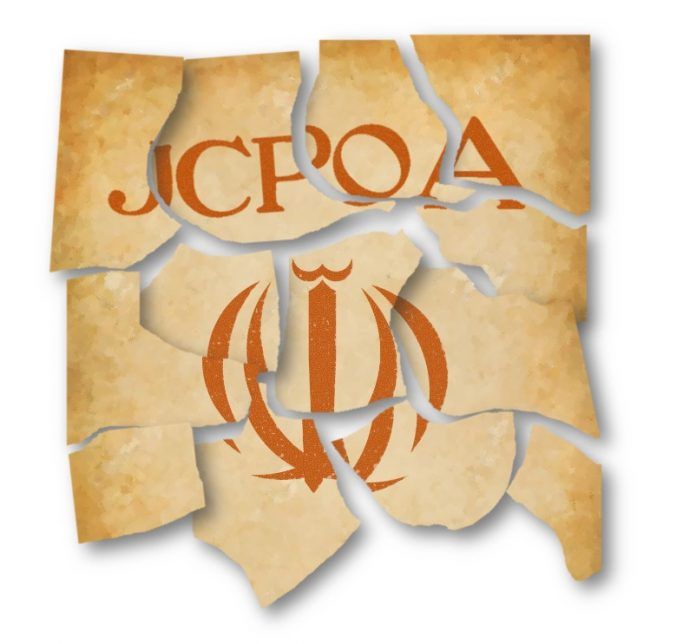 During an interview on Iran’s national television last week, Ali Akbar Salehi, the head of Iran’s Atomic Energy Organization made an astounding admission. While actively engaged in negotiations with the P5+1 in 2015 over its nuclear program, the Iranian regime was surreptitiously purchasing replacement parts for its Arak nuclear reactor. According to Mr. Salehi, although Iran had agreed to remove the Arak reactor calandria and fill its tubes with cement, the regime simultaneously purchased and stored equivalent tubes. This transaction was not shared with the P5+1. In fact, the only individual who knew of this clandestine transaction, Mr. Salehi said, was the Supreme Leader of the Islamic Revolution, Ali Khamenei. This is the extent of honesty, openness, and goodwill the Iranian regime brought to the negotiating table, at which sat officials from the United States and the European Union.

The Obama Administration’s hope in signing the Iran nuclear deal – or the Joint Comprehensive Plan of Action (JCPOA) – was twofold. One, diplomacy with Iran could trigger a domino effect leading to modification of the regime’s behavior in other arenas. Two, the funds and economic benefits resulting from the nuclear deal would help rebuild Iran’s economy and foster prosperity for the Iranian people. Neither objective materialized. Instead, extra-territorial proxy wars intensified, the Islamic Revolutionary Guard Corps further advanced its ballistic missile program, regional terrorist factions became richer, and the Iranian people became poorer. Furthermore, the regime continued with its policy of repression and human rights violations, including crackdown on activists and extrajudicial imprisonments.

Now, nearly nine months after the United States’ withdrawal from the JCPOA, there is an ongoing chatter over reversing President Trump’s decision and returning to the deal. On various media platforms, individuals aligned with the Iranian regime who reside in the West consistently express hope for a Democrat to replace Mr. Trump in the 2020 United States elections and thereby, re-implement the nuclear deal. The National Iranian American Council, an organization highly suspected to serve as the regime’s lobby in Washington and instrumental in securing the Iran deal, incessantly warns that if the JCPOA is not restored, a war with Iran is definite.

The broader question in this context, however, is whether or not the deal is salvageable at all. There are several obstacles in the way. European countries, fed up with the regime’s refusal to halt its ballistic missile program and terrorist plots on their soil, are shying away from the deal and prepared to impose new sanctions. Furthermore, the Europeans have experienced repeated setbacks in the development of a special purpose vehicle to bypass United States sanctions. Just recently, they succeeded in launching a delicate conduit – with strings attached – in conducting transactions with Iran, focusing on humanitarian needs. If these vehicles fail to progress beyond humanitarian trade, Europe might sooner or later realize that saving the JCPOA is just not worth the fight or the risk of losing business opportunities with the United States. Lastly, it is possible that the regime’s so-called hardliners, who were against the JCPOA from the get-go, to vehemently oppose its re-implementation.

The United States cannot reverse its decision and instantaneously “snap back” sanctions relief for the Iranian regime. Given the regime’s pattern of behavior following the JCPOA, preconditions are necessary to return the delegates to the negotiating table. These preconditions, twelve in all and outlined by Secretary Mike Pompeo in May 2018, largely emphasize the Revolutionary Guard’s malevolent activities in the Middle East. Additionally, a fresh set of provisions is necessary for the negotiations. This is to minimize the regime’s chance of success in its “bait and switch” strategy. There should be no sunset clause in the new deal, unless Iran is prepared to recognize Israel as a sovereign nation and cease its hostility towards the Jewish state.

Key issues such as the ballistic missile program and human rights violations should be included in the package presented to the Iranians. The regime must abandon its abhorrent habit of detaining dual citizens without disclosing the charges against them. Iran’s interference in the domestic affairs of neighboring countries and financing terrorist factions and militias in the region must stop. Last but not least, a new deal should require ratification by the United States Congress in order to become a treaty. The same should be done by the Iranian government. Otherwise, the flip-flop of executive orders by succeeding United States presidents will continue indefinitely.

All this said, the Iranian regime’s sincerity and reliability at the negotiating table and beyond still remains the ultimate impediment. The regime has repeatedly asserted that its ballistic missile program is for defense purposes and not subject to negotiation. It also claims a stellar human rights record and brushes off any allegation of supporting terrorist proxies in the region. Denials and cover-ups notwithstanding, when the man in charge of Iran’s nuclear program admits on national television how the regime duped the Obama Administration, it is difficult to sit at the negotiating table across from him and maintain a straight face.