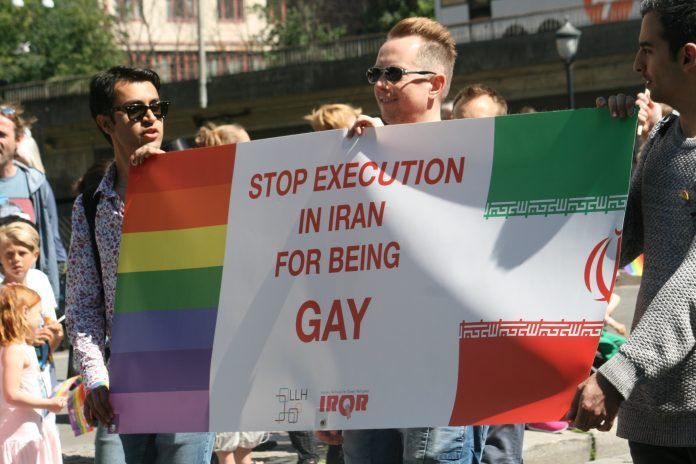 June is considered “Pride Month” in Toronto, where we gather to honor the diversity of its LGBT Community throughout the month and end the festivities with the annual Pride Parade celebration.

While Toronto and many other major international cities celebrate Pride week/month, many homosexuals and members of the LGBT community in Iran are forced to hide their sexuality and live in fear of serious persecution, including the death penalty by the Islamic Regime in Iran.

Iran is one of a number of Islamic countries where homosexuality is perceived as a crime and can be punishable by death.  The Islamic Regime in Iran punishes homosexual intercourse between men by death, while “lesser” acts such as kissing is punishable by flogging.  Women can also be flogged for homosexual acts.

Hassan Afshar was arrested in December of 2014 when Islamic Regime authorities received complaints that Hassan Afshar and two (2) other youths had forced a teenage boy to have intercourse with them.  Throughout his “trial” and persecution Hassan Afshar maintained his position that the intercourse had been consensual.  Ironically, if the teenage boy who had filed the complaint had admitted that the sex had been consensual, he would have most likely been sentenced to death as well.

While homosexuality in Iran is against the law, Transsexuality is not, as long as it is accompanied by a sex change operation. Unfortunately, there are many reports of gay men and lesbian women being pressured into same-sex operations by their families as well as by the government.  There have been reports of suicides by transsexuals who end up regretting having a sex change operation, suffer from serious depression and eventually ending their lives. Fleeing Violence, Gay Iranian Refugees Find Safety in Toronto

Last summer Iranian Railroad for Queer Refugees, a credible Canadian organization reported the arrest of 50 homosexuals in April of 2017 in the city of Esfehan. According to their report a private party where about 50 people were in attendance was raided by the Revolutionary Guards. Some guests tried to escape by jumping over the wall, however all but one individual was apprehended and arrested. Based on a report from the same organization as of June of 2017 all 49 individuals are still in custody, with no or very little access to legal counsel.  They have been offered “plea offers” of between 6-12 months of imprisonment, or 80 lashes.

It is important to note that Western countries consider the current President Hassan Rouhani a “moderate”, however the sad reality is that not only has the human rights situation in Iran not improved under Rouhani’s Presidency, it has arguably become even worse.  The persecution of the LGBT community is just one tragic example of Islamic Regime’s brutal human rights violations.

Sayeh Hassan is an Iranian-Canadian lawyer, blogger and pro-democracy activist