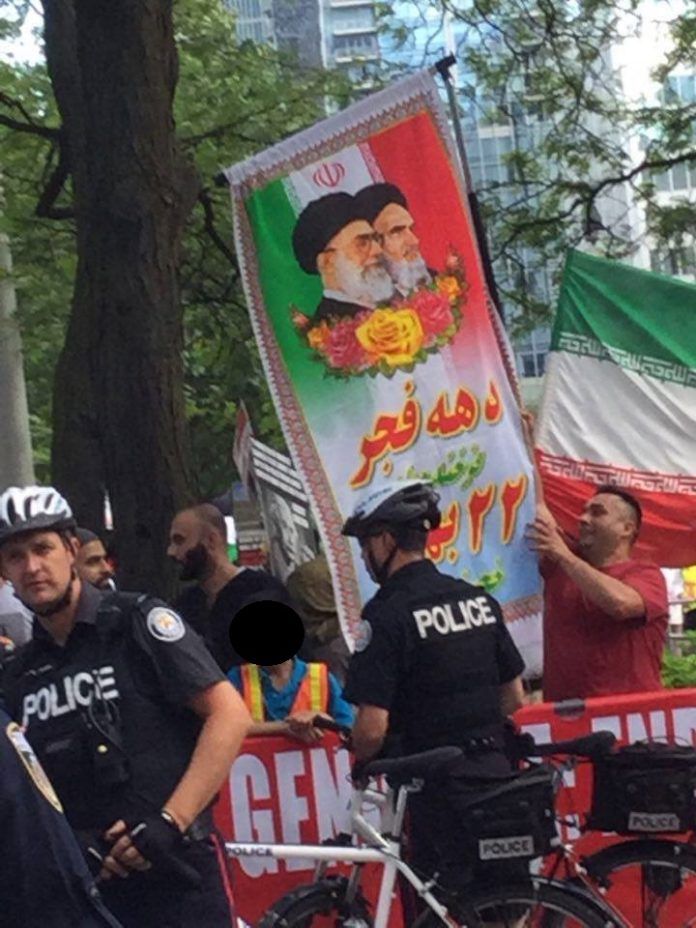 The Islamic Republic is a state sponsor of terrorism—that’s why Canada shut down the Iranian embassy in Ottawa in September 2012.

Chapter 152 of the Islamic Republic constitution  as well as its terror export and kleptocratic behavior conflicts with Chapter 2 of UN Charter.

The Islamic constitution that was established in Iran effectively brought a fundamentalist Islamist regime to power which systematically suppressed all other voices and sociopolitical constituencies like pro constitutional monarchy, nationalists, liberals, socialists, women, and religious and ethnic minorities. This has led to a vicious process of violation of human rights in Iran since the establishment of the Islamic regime; a process that still vigorously continues since its inception.

Each week during Friday prayers in Tehran, the regime openly and regularly utters death threats against the United States, Israel and their Western allies. Given Iran’s history, it would be wise not to take these threats lightly.

The West must not be fooled by Iran’s manipulative charm. For 40 years, the Islamic regime of Iran has relentlessly pursued a global Islamic mission which was engineered by jihadis Ayatollah Khomeini, Iran’s founding dictator. Khomeini said in his own words, “We will export our revolution to the entire world.”  and Iran’s Revolutionary Guards and Quds Forces have been resolutely dedicated to that end.  Iran’s Islamic Revolution Guards Corps (IRGC) commander, Mohammad Ali Ja’afari, clearly stated this goal. He said, “Our Imam did not limit the Islamic Revolution to this country … Our duty is to prepare the way for an Islamic world government.”

The aim of the occupying, kleptocratic Islamic regime in Iran is clearly to acquire a nuclear weapons capability and to retain as much territory in the Middle East, North Africa and South America under the Hezbollah and the Shia Islamist rule, whatever the human cost which has been willfully ignored by majority of Western politicians.

Iran’s dictator, Ali Khamenei advertises Iran’s terror support. “Hezbollah and its pious youth,” he told the Union of Islamic Pupils’ Associations, “are shining like the Sun and they are a source of honour for the Muslim world.” All this, when Tehran should be on its best behaviour, if only to advance its sanctions-busting, militarist objectives.

Islamic Republic of Iran created 48 Shiite sleeper cell groups in Iraq under the Quds Forces to take over the country’s army and to spread throughout the Middle East. The Islamic revolutionary model has been reproduced in Iraq, Syria and Yemen as well, by setting up those same structures. The “Army-People (Basij), Resistance” formula was never just a mere slogan, it’s an Iranian regime blueprint dating back to the birth of  Khomeini’s Islamic Occupation. Islamic Republic of Iran’s global terror campaign, and its subversion of countries throughout and beyond the Middle East, is their ultimate goal to export their Islamic Revolution.

The international community’s attention must also be drawn to some of the more particularly inhuman and nefarious activities of the Iranian regime.

The Islamic Republic started with an officially-approved massacre of all sorts of dissidents. Along with the functionaries of the former monarchy, thousands of opposition members whose views differed from that of the Islamic Republic,were either hanged or shot dead after sham trials—or even without them.

Internationally, Tehran’s dictatorship is implicated in extensive violence: assassinations in Germany and France, major bombings in Lebanon and Argentina and operations in the United States. With Hezbollah, its terrorist progeny, Islamic regime in Iran increasingly operates in South America. No surprise: in the 1990s current Iranian president Hassan Rouhani was a key player in a “campaign of terror against Iranian dissidents in Europe.” Today, Iran and Hezbollah prop up Syria’s Assad by facilitating sectarian bloodletting. Tehran threatens the Persian Gulf region and reinforces Yemen’s butchery.

We live in a world steeped in tyranny and terror, where hundreds of thousands are butchered in Syria, Libya, Yemen, Afghanistan and Iraq, hundreds of young girls are abducted in Nigeria and gays are hanged from cranes in Iran. Militant Islam has been rapidly spreading in every part of the world with an ambition to dominate the world, and it is on the march to hurt ethnic and religious minority groups—including the moderate Muslims—everywhere it can.

Reinvigorating a greater North America is vital to any anti-access strategy against Iran and Hezbollah’s advancement in the Western Hemisphere and to protect the peace and security of the world, the cancer— of the Islamic Republic of Iran—must be removed, before it’s too late.