Reports that hundreds of Iranians have been infected with HIV in the village of Chenar Mahmoud, in Lordegan, Iran, by a government health worker conducting a diabetes screening program remain unconfirmed.

Villagers from Chenar Mahmoud reacted angrily to the rumors by burning the government-run health clinic, setting fire to the Friday Prayer Imam’s office and attacking the local Governor’s building. Amateur video footage shared on Twitter showed Iranian security forces clashing with protesters who appear to have been injured during the riots.

The allegations were made by residents in the village following confirmation by Iranian officials that 70 people had contracted the virus in the area. Whether the confirmed cases are directly related to the screening program which uses syringes to test for diabetes is yet to be determined.

Dr. Arash Alaei, a former senior consultant for UNICEF and co-President of the Institute for International Health and Education in New York, whose work alongside his brother Kamiar Alaei in the field of HIV prevention and treatment has gained international recognition, told Kayhan Life that it would be almost impossible to determine how the villagers contracted the infection.

“To identify the origin of transmission, you need to have an advanced molecular laboratory which is not available in that village. A laboratory like this could exist in Iran’s capital, Tehran, but it may well be the only one in the entire country,” he said.

“It is therefore impossible to know what caused the outbreak in this village at this time. Furthermore, reports that only one syringe was used — and was capable of spreading the virus to over 300 people — are incorrect. The centre would also have used several syringes during the screening,” Dr. Alaei, who remains in contact with his patients in Iran after leaving the country, added.

Although the cause of the outbreak is unlikely to be discovered, Dr. Alaei said he was surprised by the large volume of confirmed cases in such a small area.

“The village has a population of 1,800 and up to 1,400 people in the village were tested by the Ministry of Health for diabetes, but 5 percent of people tested were found to have HIV. This is an unusual statistic. The infection average in Iran is 1 person per 1,000 people in the population. This means that in this village the rate is fifty times higher than the country’s national average, which is exceptionally high,” he said.

The diabetes screening program in Chenar Mahmoud took place from April to May, with patients tested for HIV some time before August. It can take three to 12 weeks for enough signs of the virus to show up on routine tests for the infection.

Responding to the villagers’ claims that a state health worker had infected men, women and children with the virus while carrying out the diabetes screenings, Iran’s Health Minister Saeed Namaki denied the allegations.

Namaki also confirmed that the Health Ministry had known about the cases for several months and kept the incident a secret, “to protect the dignity of the people in the region.” The Health Minister said that the sources of the outbreak were drug addicts, men and women having sex outside of marriage and individuals engaged in homosexual relationships.

Dr. Alaei said that the stigma around Aids in Iran may have led the villagers to accuse the government-run health clinic for the outbreak. Individuals could also fear being arrested after receiving a positive diagnosis.

Iran’s courts can impose a life sentence on anyone caught using illegal drugs, while homosexuality is banned in Iran and remains punishable by death.

“Stigmatization around Aids has stopped the village from being able to sell its food because no one wants to buy goods from them anymore. Children with HIV find they are rejected at school by their classmates — all of these outcomes are forms of discrimination and the government has fostered it,” Dr. Alaei explained. 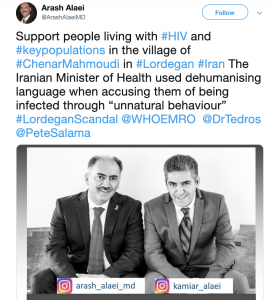 Alaei said the underlying problem was the Iranian government’s ongoing mismanagement of the country’s health sector.

“The challenge is mismanagement at government level. The Global Fund has given Iran $5 million to buy antiretroviral drugs, all untouched by sanctions, but the government distributed expired drugs amongst people with HIV instead. The government is also not monitoring its HIV patients properly, and we do not know why,” he said.

Villagers in Chenar Mahmoud in Lordegan, southern #Iran, vehemently deny regime officials' claim that the spread of HIV in the village is only among addicts, saying that the regime people were infected after a diabetes test. pic.twitter.com/DDuLMmFu5s

The Iranian government acknowledged problems with its health sector after a system designed to make the sector more accountable failed to deliver any improvement.

Iran’s Minister of Health confirmed there had been difficulties inside the sector on October 8, following the discovery of an individual who had been able to import Testosterone by labeling the packages as coconut powder and cocoa powder. Namaki said that the system in place to ensure transparency, “Had a good infrastructure for transparency, but had never moved towards transparency.”

Past blood contamination scandals in Iran have also been documented. According to Iran’s Ministry of Health, from 1983 to 1986 approximately 300 people, many of them children suffering from hemophilia, were exposed to blood contaminated with HIV while undergoing blood transfusions.

Three doctors in Iran were charged with negligence and importing HIV-tainted supplies from the Mérieux company in France. However, the company remained active in Iran until 2009.

A mother from Chenar Mahmoud tells the Governor, Deputy Minister and Brigade Commander Hashem Shahrekord that her toddler (being held by a man in the video) has AIDS but that she and her husband are healthy. The child had visited the health clinic.