The Speaker of the Majlis (Iranian Parliament) Ali Larijani has criticized France, Germany and the UK for triggering Article 37 — the dispute mechanism, or Snap Back mechanism, stipulated in the 2015 Iran nuclear deal — after Tehran took steps to further scale back its commitments to the agreement.

Mr. Larijani made the remarks during an open session of the Majlis earlier this month, ICANA news website reported.

“Iran does not issue ultimatums,” Mr. Larijani said. “It has been more than a year since the U.S. began its hostile campaign against Iran’s nuclear program. Meanwhile, Europe has given us only political lip service. The Islamic Republic has been patient for a long time. I will be blunt. The Islamic Republic will reassess its cooperation with the International Atomic Energy Agency (IAEA) should the EU use the JCPOA’s Article 37 unjustly.”

Triggering the dispute mechanism will refer the matter to the UN Security Council, which will then have 30 days to adopt a resolution and reimpose the pre-JCPOA nuclear-related sanctions on Iran.

Meanwhile, Iran has once again threatened to pull out of the Treaty on the Non-Proliferation of Nuclear Weapons (NPT). Tehran has used every aspect of the nuclear issue at different times to blackmail Europe.

Many political observers believe that the three European states, known as the E3, have lost all patience with Iran, particularly after the Islamic Revolutionary Guards Corps’ (IRGC) missile attacks on Al Assad Air Base in Iraq on January 8 and the “unintentional” downing of a Ukrainian passenger plane over Tehran by the Iranian military on the same day which killed all 176 people on board.

As Prince Reza Pahlavi has said: “Terrorism and mischief are in the Islamic Republic’s DNA.”

Former U.S. President Barack Obama and his administration thought the signing of the JCPOA and releasing Iranian assets frozen since the 1979 Islamic Revolution would empower the moderates and reformists in the Islamic Republic. However, Tehran invested the money in the IRGC’s regional military campaign and ballistic missile program. Iran also resumed its nuclear activities and uranium enrichment program only six months after the signing of the JCPOA.

Since withdrawing from the JCPOA in May 2018, U.S. President Donald Trump and his administration have been pushing for a new nuclear deal with Iran.

Senior officials at the U.S. State Department, including Secretary Mike Pompeo, have said that Iran must suspend its uranium enrichment, halt its ballistic missile program, and curb its harmful regional activities before the U.S. would reopen talks.

The Islamic Republic is under a great deal of pressure, given that it has no relationship with the U.S. and is gradually losing the support of the EU country members. Iran’s Supreme Leader Ayatollah Ali Khamenei and the entire Iranian establishment are overwhelmed by the political and economic problems plaguing the country.

Mr. Khamenei and hardliners, however, remain defiant in the face of political pressure and economic sanctions.

“Our country is not facing a dead end,” Khamenei said in footage posted by the Iranian Students News Agency (ISNA) in July 2018. “There are no dead ends for the economy. It is not as if there are no solutions. We know the problems facing our economy. We also know the solutions. Those in charge must try to address these issues. They have already started.”

Meanwhile, the relationship between Iran and the West continues to deteriorate further.

On January 11, the IRGC and security forces briefly detained British Ambassador to Iran Robert Macaire, who was part of a large crowd gathered in front of the Amir Kabir University of Technology in Tehran to hold a vigil for the victims of the Ukrainian passenger plane.

The incident prompted British Foreign Secretary Dominic Raab to release a statement that said: “The arrest of our Ambassador in Tehran without grounds or explanation flagrantly violates international law. The Iranian government is at a crossroads moment. It can continue its march towards pariah status with all the political and economic isolation that entails, or take steps to deescalate tensions and engage in a diplomatic path forward.”

Mr. Macaire left Iran for a short time after a group of Basijis (volunteer militias), and seminarians staged a protest in front of the UK Embassy in Tehran.

Meanwhile, 23 deputies submitted a signed proposal to the Majlis presidium on January 19, which called for scaling down Iran’s diplomatic ties with the United Kingdom, the Mehr News Agency reported.

The Islamic Republic regime is fighting a political battle on both the domestic and international fronts. Mr. Khamenei’s vision of a united front against the onslaught of international pressure and internal challenge to his rule has not materialized.

Washington made fresh efforts to reopen negotiations with Tehran shortly after the death of the commander of the IRGC’s Qods Force (IRGC-QF) Brigadier General Ghasem Soleimani, who was killed in a targeted U.S. drone attack on Baghdad International Airport on January 3.

The initiative by Washington to reopen talks with Tehran puts more pressure on the Islamic Republic, because many elements within the regime believe that entering talks with the U.S. is the only way to break the current impasse. Nevertheless, many hardliners continue to oppose talking to the U.S. under any circumstances.

“Americans continue to use the carrot and stick diplomatic approach,” Ahmad Alirezabeigi, a Majlis deputy representing the Tabriz, Osku, and Azarshahr electoral districts in the northwestern province of East Azerbaijan, told the ICANA news website earlier this month. “The government’s apparent weakness will allow the West to get a foothold in Iran. The Islamic Republic is not against holding talks. However, we cannot enter negotiations with the U.S. because its only aim is to harm our national interest.”

“As the Supreme Leader has said, there is no point talking to the U.S.,” Yahya Kamalpour, a Majlis deputy representing Jiroft and Anbarabad electoral district in the southeast province of Kerman, said in an interview with the Iranian Students News Agency (ISNA) on January 17. “The Leader has also said that we cannot trust the European governments. We must instead strengthen our ties with our neighbors and western Asian countries.”

The hardline Tehran-based Kayhan daily has been very critical of President Rouhani’s government and everyone who advocates opening lines of communications with the U.S.

In its January 19 editorial titled “The Secret to the Success of Our Beloved Commander Was His Mistrust of the U.S. and Europe,” the paper said: “If Haj Ghasem [Soleimani] were in charge of the country’s foreign policy, we would not have signed an agreement which resulted in abandoning and halting 95 percent of the country’s nuclear program. We would not have wasted four years chasing after the enemy’s unfulfilled promises. We would not have ended up empty-handed and left with a feeling that we are the ones at fault.”

“They have launched a negative propaganda campaign accusing Iran of not fulfilling its commitments! Curiously, the three sinister European governments [in the E3] have been manipulating Iran since the criminal U.S. withdrew from the nuclear agreement,” the paper added. “They have strung us along for 20 months with the empty promise of SPV [Special Purpose Vehicle] and INSTEX [Instrument in support of Trade Exchanges]. We have been a pawn in the mediation game run by France and Japan.”

Coronavirus is a Bioterrorist Attack Against Iran and China, Majlis Deputy... 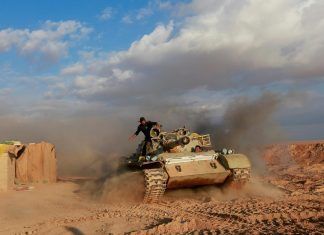